Surviving Hitler: A Boy in the Nazi Death Camps (Paperback) 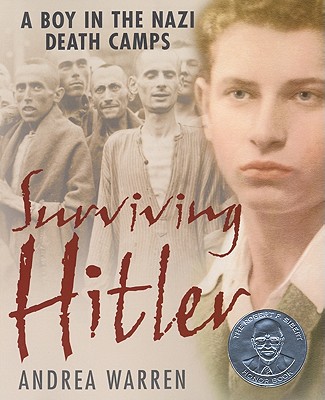 The life-changing story of a young boy’s struggle for survival in a Nazi-run concentration camp.

Narrated in the voice of Holocaust survivor Jack Mandelbaum, this harrowing true story includes black-and-white photos from the archives of the U.S. Holocaust Memorial Museum.

When twelve-year-old Jack Mandelbaum is separated from his family and shipped off to the Blechhammer concentration camp, his life becomes a never-ending nightmare. With minimal food to eat and harsh living conditions threatening his health, Jack manages to survive by thinking of his family.

In this Robert F. Silbert Honor book, readers will glimpse the dark reality of life during the Holocaust, and how one boy made it out alive.

Andrea Warren says, "I'm always looking behind facts and dates in search of how extraordinary times impact ordinary people. I think the most engaging way to study history is by seeing it through the eyes of participants. Each of us wants to know, If that had been me at that time, in that place, what would I have done? What would have happened to me?"

Among Warren's honors are the prestigious Boston Globe-Horn Book Award for Orphan Train Rider: One Boy's True Story, which was also selected as an ALA Notable Book. She won the Midland Authors Award for Pioneer Girl. Growing Up on the Prairie. A former teacher and journalist, Warren writes from her home in the Kansas City suburb of Prairie Village, Kansas.

“A valuable addition to Holocaust literature for children and teens and should be in every middle school collection.” — VOYA