The Ides of March: A Novel (Paperback) 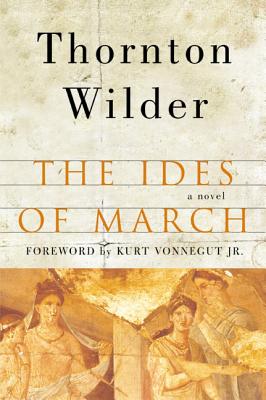 “Mr. Wilder has brought to his character the warmth which was totally lacking in the Caesar of schoolbooks and Shakespeare, and in his hero’s destruction there is the true catharsis.” —Edward Weeks, Atlantic

First published in 1948, The Ides of March is a brilliant epistolary novel of the Rome of Julius Caesar. Through imaginary letters and documents, Wilder brings to life a dramatic period of world history and one of its magnetic personalities.

In this inventive narrative, the Caesar of history becomes Caesar the human being as he appeared to his family, his legions, his Rome, and his empire in the months just before his death. In Wilder’s inventive narrative, all Rome comes crowding through his pages. Romans of the slums, of the villas, of the palaces, brawling youths and noble ladies and prostitutes, and the spies and assassins stalking Caesar in his Rome.

Thornton Wilder (1897-1975) was an accomplished novelist and playwright whose works, exploring the connection between the commonplace and cosmic dimensions of human experience, continue to be read and produced around the world. His Bridge of San Luis Rey, one of seven novels, won the Pulitzer Prize in 1928, as did two of his four full-length dramas, Our Town (1938) and The Skin of Our Teeth (1943). Wilder's The Matchmaker was adapted as the musical Hello, Dolly!. He also enjoyed enormous success with many other forms of the written and spoken word, among them teaching, acting, the opera, and films. (His screenplay for Hitchcock's Shadow of Doubt [1943] remains a classic psycho-thriller to this day.) Wilder's many honors include the Gold Medal for Fiction from the American Academy of Arts and Letters, the Presidential Medal of Freedom, and the National Book Committee's Medal for Literature.

“Wilder has brought to his character the warmth which was totally lacking in the Caesar of schoolbooks and Shakespeare, and in his hero’s destruction there is the true catharsis.”
— Atlantic

“What distinguishes [The Ides of March] is a rich, shrewd and glowing characterization of Caesar’s restless mind.”
— New York Times

“Not only the stature of Caesar but also his tragedy is suggested, and the tragedy is the more impressive because it is never stated. It arises from the total impression of this short, witty and extremely serious book.”
— Times Literary Supplement [London]

“Full of the wisdom of the ages — as well as satirical observations on man’s political instability, loves, joys and terrors.”
— Chicago Tribune