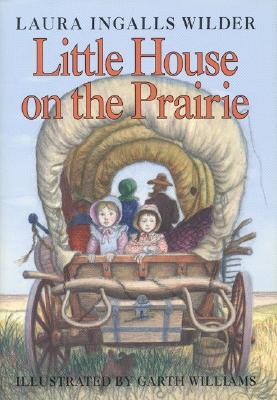 By Laura Ingalls Wilder, Garth Williams (Illustrator)
$20.57
This item is backordered and not currently available. Please contact us for an estimated availability date.

Based on the real-life adventures of Laura Ingalls Wilder, Little House on the Prairie is the third book in the award-winning Little House series, which has captivated generations of readers. This edition features the classic black-and-white artwork from Garth Williams.

Laura Ingalls and her family are heading to Kansas! Leaving behind their home in the Big Woods of Wisconsin, they travel by covered wagon until they find the perfect spot to build a little house on the prairie. Laura and her sister Mary love exploring the rolling hills around their new home, but the family must soon get to work, farming and hunting and gathering food for themselves and for their livestock. Just when the Ingalls family starts to settle into their new home, they find themselves caught in the middle of a conflict. Will they have to move again?

“Based on the real-life experiences of the author, this series introduces a new generation of readers to life on the American frontier. I couldn’t stop reading it! I recommend this book for people who love history.” — Brightly