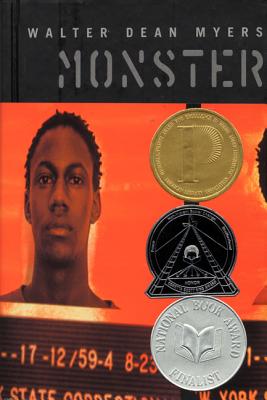 Presented as a screenplay of Steve's own imagination, and peppered with journal entries, the book shows how one single decision can change our whole lives.

Monster is a multi-award-winning, provocative coming-of-age story that was the first-ever Michael L. Printz Award recipient, an ALA Best Book, a Coretta Scott King Honor selection, and a National Book Award finalist.

The late Walter Dean Myers was a National Ambassador for Young People’s Literature, who was known for his commitment to realistically depicting kids from his hometown of Harlem.

Walter Dean Myers was the New York Times bestselling author of Monster, the winner of the first Michael L. Printz Award; a former National Ambassador for Young People's Literature; and an inaugural NYC Literary Honoree. Myers received every single major award in the field of children's literature. He was the author of two Newbery Honor Books and six Coretta Scott King Awardees. He was the recipient of the Margaret A. Edwards Award for lifetime achievement in writing for young adults, a three-time National Book Award Finalist, as well as the first-ever recipient of the Coretta Scott King-Virginia Hamilton Award for Lifetime Achievement.

“A novel that in both form and subject guarantees a wide teen audience.” — Horn Book (starred review)

“The sheer authenticity of the novel and its presentation are disquieting—and totally riveting.” — Boston Globe-Horn Book Award Committee

“The drama of the situation and the ethical questions raised will keep the audience not just reading but thinking.” — Bulletin of the Center for Children’s Books

"A fascinating portrait of a terrified young man wrestling with his conscience. The tense drama of the courtroom scenes will enthrall readers, but it is the thorny moral questions raised in Steve’s journal that will endure in readers’ memories.”
— Booklist

“Monster is a subtle and provocative novel about what it means to be alive in our time.” — Riverbank Review

"The youthful, vulnerable voice will draw in YA readers, boys and girls.” — Voice of Youth Advocates (VOYA)