A Series of Unfortunate Events #13 CD: The End (CD-Audio) 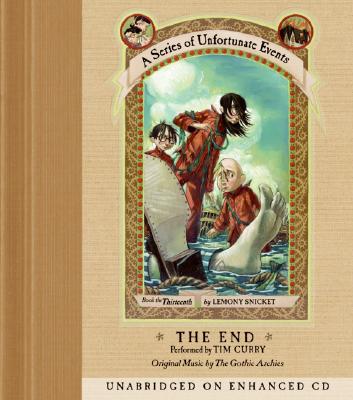 This is book number 13 in the Series of Unfortunate Events series.

Like an off-key violin concert, the Roman Empire, or food poisoning, all things must come to an end. Thankfully, this includes A Series of Unfortunate Events by Lemony Snicket. The thirteenth and final installment in the groundbreaking series will answer readers' most burning questions: Will Count Olaf prevail? Will the Baudelaires survive? Will the series end happily? If there's nothing out there, what was that noise?

Then again, why trouble yourself with unfortunate resolutions? Avoid the thirteenth and final book of Lemony Snicket's international bestselling series and you'll never have to know what happens.

Tim Curry has portrayed many memorable characters, most notably the role of the scientist in the Broadway and film versions of The Rocky Horror Picture Show, and Arthur in the Broadway production of SPAMalot.