Culture and Prosperity: Why Some Nations Are Rich but Most Remain Poor (Paperback) 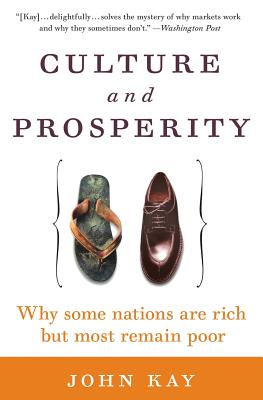 Why are some countries rich and others poor? Why does a farmer in Sweden have a higher standard of living than a farmer in South Africa? Why does a schoolteacher in Switzerland earn more than one in Chicago?According to leading economic theorist John Kay, economic markets are key to the wealth or poverty of the world's nations. In Culture and Prosperity, Kay explores why market economies outperform socialist or centrally directed markets -- and why the imposition of market institutions often fails. His search for the truth about markets takes him from the shores of Lake Zurich to the streets of Mumbai, through theories of evolutionary psychology and moral philosophy to the flower market at San Remo and Christie's salesroom in New York.

Witty, engaging, and grounded in cutting-edge economic theory, Culture and Prosperity is essential for understanding the state of the world today.

John Kay is one of Britain's leading economists. He has been a professor at the London Business School and the University of Oxford, and is currently a visiting professor at the London School of Economics. He is the only professor of management to receive the academic distinction of Fellowship of the British Academy. A frequent writer, lecturer, and broadcaster, he contributes a weekly column to the Financial Times. He commutes between London, Oxfordshire, and the south of France.

“[Kay]…delightfully…solves the mystery of why markets work and why they sometimes don’t.” — Washington Post

“One of the leading British economists of his generation…gives answers to those puzzling questions that nag the non-specialist.” — The Independent

“An ambitious and brilliantly executed book... accessible and witty, it sheds light on the way the world works.” — London Times

“Written with wit and subtlety ... Kay’s book is an important contribution to the post-1990s reassessment of capitalism.” — Daily Telegraph (London)