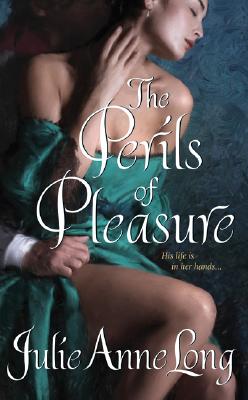 This is book number 1 in the Pennyroyal Green series.

Scandal has rocked the city of London. Colin Eversea, a handsome, reckless unapologetic rogue is sentenced to hang for murder and, inconveniently for him, the only witness to the crime disappears. Then again, throughout history, the Everseas have always managed to cheat fate in style: Colin is snatched from the gallows by a beautiful, clever mercenary.

Cool-headed, daring Madeleine Greenway is immune to Colin's vaunted charm. Her mission is not to rescue Colin but to kidnap him, and to be paid handsomely for it. But when it becomes clear that whoever wants Colin alive wants Madeline dead, the two become uneasy allies in a deadly race for truth. Together, they'll face great danger—and a passion neither can resist.

USA Today bestselling author and Rita® Award winner Julie Anne Long’s books have been translated into eighteen languages, nominated for numerous awards, and have appeared on dozens of “Best of” lists. NPR named her Pennyroyal Green series as one of the Top 100 romance series of all time. She currently lives in Northern California.