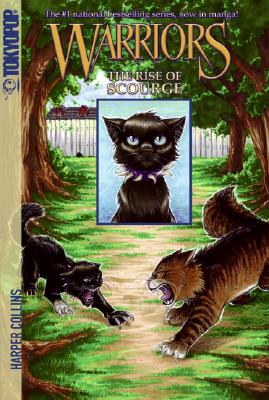 This is book number 4 in the Warriors Manga series.

A stand-alone manga from the world of Erin Hunter’s #1 nationally bestselling Warriors series!

In this manga adventure, discover the origins of one of Warriors’ fiercest villains: Scourge, the leader of BloodClan in Warriors #6: The Darkest Hour.

When kittypet Tiny crosses paths with some wild forest cats defending their territory, they leave him with scars—and a bitter, deep-seated grudge. As his reputation grows among the strays and loners that live in the dirty brick alleyways of Twolegplace, he changes his name to Scourge and puts everything about his old life behind him . . . except his deadly desire for revenge.

Erin Hunter is inspired by a love of cats and a fascination with the ferocity of the natural world. In addition to having great respect for nature in all its forms, Erin enjoys creating rich mythical explanations for animal behavior. She is the author of the Warriors, Seekers, Survivors, Bravelands, and Bamboo Kingdom series. Erin lives in the UK.