A Duke of Her Own (Desperate Duchesses #6) (Mass Market) 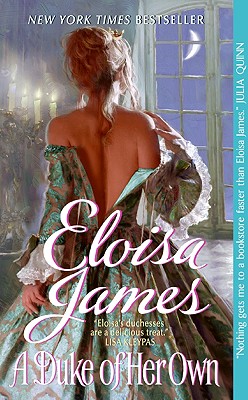 This is book number 6 in the Desperate Duchesses series.

Leopold Dautry, the notorious Duke of Villiers, must wed quickly and nobly—and his choices, alas, are few. The Duke of Montague's daughter, Eleanor, is exquisitely beautiful and fiercely intelligent. Villiers betroths himself to her without further ado.

After all, no other woman really qualifies. Lisette, the outspoken daughter of the Duke of Gilner, cares nothing for clothing or decorum. She's engaged to another man, and doesn't give a fig for status or title. Half the ton believes Lisette mad—and Villiers is inclined to agree.

Torn between logic and passion, between intelligence and imagination, Villiers finds himself drawn to the very edge of impropriety. But it is not until he's in a duel to the death, fighting for the reputation of the woman he loves, that Villiers finally realizes that the greatest risk may not be in the dueling field . . .

But in the bedroom. And the heart.

Eloisa James is a USA Today and New York Times bestselling author and professor of English literature, who lives with her family in New York, but can sometimes be found in Paris or Italy. She is the mother of two and, in a particularly delicious irony for a romance writer, is married to a genuine Italian knight. Visit her at www.eloisajames.com.