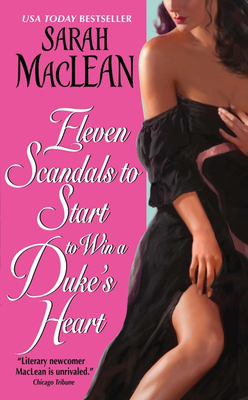 This is book number 3 in the Love By Numbers series.

She lives for passion.

Bold, impulsive, and a magnet for trouble, Juliana Fiori is no simpering English miss. She refuses to play by society's rules: she speaks her mind, cares nothing for the approval of the ton, and can throw a punch with remarkable accuracy. Her scandalous nature makes her a favorite subject of London's most practiced gossips . . . and precisely the kind of woman The Duke of Leighton wants far far away from him.

He swears by reputation.

Scandal is the last thing Simon Pearson has room for in his well-ordered world. The Duke of Disdain is too focused on keeping his title untainted and his secrets unknown. But when he discovers Juliana hiding in his carriage late one evening—risking everything he holds dear—he swears to teach the reckless beauty a lesson in propriety. She has other plans, however; she wants two weeks to prove that even an unflappable duke is not above passion.

A life-long romance reader, Sarah MacLean wrote her first romance novel on a dare, and never looked back. She is the New York Times and USA Today bestselling author of romances translated into more than twenty languages, a romance columnist, and the co-host of the weekly romance novel podcast, Fated Mates. A graduate of Smith College and Harvard University, she lives in New York City.

‘Wow! What an amazing book about two people who are meant to be together, but need fate to intervene.” — Eye on Romance

MacLean has penned a fast-paced, funny tale with a marvelous cast of characters who captivate and enchant. This book should come with a warning: Once you start, you won’t want to put it down! — Romantic Times BOOKclub

An entertaining Regency debut.... The 19th-century clothes are luscious, the 21st-century sensibility is raunchy, and it’s all implausible, escapist fun. — Publishers Weekly

Wow, what a great book! I love it. One of the best wrenching-heart scenes ever...Fabulous! — Eloisa James

“Sarah MacLean has a gift that seems to get better with every book.” — Night Owl Romance

“Cleverly orchestrated and genuinely touching, 11 Scandals to Start is a treat from start to finish.” — New York Journal of Books