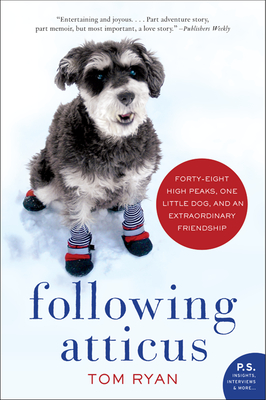 “Reader, beware! This is not just another dog book! When Tom Ryan welcomed Atticus M. Finch, a miniature schnauzer, into his life, little did he know what courage, pluck, and unwavering love he would get in the bargain. This is a beautifully written book about the very special bond between a man and his dog, an amazing quest, and the mountains that healed them.”
— Barbara Drake, White Birch Books, North Conway, NH

Set against the backdrop of New Hampshire’s White Mountains, a man and a dog embark on the challenge of a lifetime in this true story of love, loss, and the resilience of the human and animal spirit.

After a close friend died of cancer, middle-aged, overweight, acrophobic newspaperman Tom Ryan decided to pay tribute to her in a most unorthodox manner. Ryan and his friend, miniature schnauzer Atticus M. Finch, would attempt to climb all forty-eight of New Hampshire’s four-thousand-foot peaks twice in one winter while raising money for charity. It was an adventure of a lifetime, leading them across hundreds of miles and deep into an enchanting but dangerous winter wonderland. At the heart of the amazing journey was the extraordinary relationship they shared, one that blurred the line between man and dog.

Following Atticus is an unforgettable true saga of adventure, friendship, and the unlikeliest of family, as one remarkable animal opens the eyes and heart of a tough-as-nails newspaperman to the world’s beauty and its possibilities.

Tom Ryan served as publisher and editor of the Newburyport, Massachusetts, newspaper The Undertoad for more than a decade. In 2007 he sold the newspaper and moved to the White Mountains of New Hampshire with miniature schnauzer Atticus M. Finch. Over the last five years, Tom and Atticus have climbed more than 450 four-thousand-foot peaks.

“Exceptionally evocative writing and [an] engaging story . . . this is a book that can be read more than once. Inspirational and heart-warming.” — Library Journal

“How can you go wrong with a cute little dog who braved the White Mountains’ highest peaks time and again…over the ice, snow and sometimes deadly uncertainty of wild winter altitude in New Hampshire? Far more than just a typical man–and–his–dog account…Ryan and Atticus have delivered on all counts.” — Manchester Union Leader

“Need your faith in humanity restored? Read this book. It’s lovely to learn about our higher selves from an unlikely source like Atticus M. Finch.” — The Day (Connecticut)

“Not your standard mountain adventure book. . . . Reading Following Atticus can feel like taking a long walk, or a series of walks, with a great storyteller. Why ‘follow Atticus?’ Because, [Ryan says], ‘Dogs, like mountains, bring you back to yourself.’” — AMC Outdoors

“Ryan . . . is an engaging storyteller whose humorous, self-deprecating descriptions evoke Bill Bryson’s A Walk in the Woods: Rediscovering American on the Appalachian Trail and John Steinbeck’s Travels with Charley: In Search of America.” — Appalachia