The Tilted World: A Novel (Paperback) 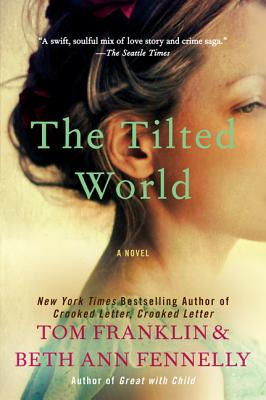 “In a compelling, poetic, and detailed manner, Franklin and Fennelly bring to life a little-known catastrophe in American history. The Tilted World weaves together the stories of two endearing characters -- an orphan who grows up to be a decorated World War I hero turned Prohibition revenuer and a bootlegging firecracker of a woman who yearns for her lost child. Add the setting of a town on the brink of destruction by deluge and some unsavory characters looking to profit from calamity, and the reader will be swept away by their story.”
— Sara Peyton, CoffeeTree Books, Morehead, KY

In 1927, as rains swell the Mississippi, the river threatens to burst its banks and engulf everything in its path, including the tiny hamlet of Hobnob, where federal agents Ted Ingersoll and Ham Johnson arrive to investigate the disappearance of two fellow agents—and find a baby boy abandoned in the middle of a crime scene.

Ingersoll finds a home for the infant with local woman Dixie Clay Holliver, unaware that she's the best bootlegger in the county and has many tender and consequential secrets of her own.

The Tilted World is an extraordinary tale of murder and moonshine, sandbagging and saboteurs, and a man and a woman who find unexpected love.

Tom Franklin is the New York Times bestselling author of Crooked Letter, Crooked Letter, which won the Los Angeles Times Book Prize and the Crime Writers' Association's Gold Dagger Award. His previous works include Poachers, Hell at the Breech, and Smonk. He teaches in the University of Mississippi's MFA program.

Beth Ann Fennelly has published three volumes of poetry and a work of nonfiction, Great with Child. She directs the University of Mississippi's MFA program.

“A new novel from Tom Franklin is always a reason to get excited, but a novel from Franklin and Fennelly is just cause to throw a block party.” — Dennis Lehane, New York Times bestelling author of Live By Night

“The Tilted World is everything I hold dear in a novel—a raucous, page-turning story with grit, utterly steeped in the land and people, and told in such poetic language that I kept forcing myself to slow down so I could enjoy the writing.” — Eowyn Ivey, New York Times bestselling author of the The Snow Child

“Thriller stories are easy to come by—as are small lyrical gems. The two come together in The Tilted World. . . . You will experience a sprawling story of conflict, disorder, shame, and horror that is umbrellaed by an even bigger story—one of love.” — Garden & Gun magazine

“A swift, soulful mix of love story and crime saga . . . evocative characters and unpretentious but shapely prose . . . The Tilted World is literary crime fiction of the highest order.” — Seattle Times