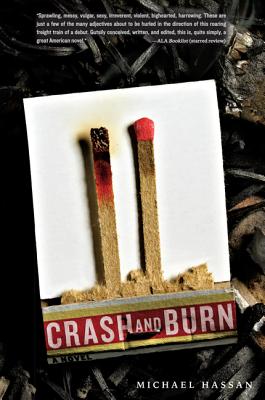 On April 21, 2008, Steven "Crash" Crashinsky saved more than a thousand people when he stopped his classmate David Burnett from taking their high school hostage armed with assault weapons and high-powered explosives.

You likely already know what came after for Crash: the nationwide notoriety, the college recruitment, and, of course, the book deal. What you might not know is what came before: a story of two teens whose lives have been inextricably linked since grade school, who were destined, some say, to meet that day in the teachers' lounge of Meadows High.

And what you definitely don't know are the words that Burn whispered to Crash right as the siege was ending, a secret that Crash has never revealed.

Michael Hassan lives in the Northeast. Crash and Burn is his first novel.

“Sprawling, messy, vulgar, sexy, irreverent, violent, bighearted, harrowing. These are just a few of the many adjectives about to be hurled in the direction of this roaring freight train of a debut… Gutsily conceived, written, and edited, this is, quite simply, a great American novel.” — Booklist (starred review)

“[Crash and Burn] is a must-read for teens and adults alike who want to understand the lack of empathy that permeates contemporary culture; it offers no answers, but the mirror it does present may be chilling enough to awaken readers to the costs of not getting it right.” — Bulletin of the Center for Children’s Books (starred review)

“Michael Hassan has written a darkly funny story about a school shooting. I didn’t know it was possible but I knew it was brave. Thankfully, he pulls it off.” — Ned Vizzini, author of It's Kind of a Funny Story and The Other Normals