Jump: Take the Leap of Faith to Achieve Your Life of Abundance (Hardcover) 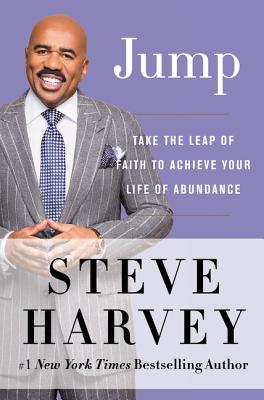 On January 13, 2016, at the close of a taping of Family Feud, Steve Harvey spontaneously began to speak. Not knowing that the cameras were still rolling, the $100 million-dollar host offered his studio audience insights into his own happiness and success. His staff, also moved by Steve’s passionate words, shared the riveting six-minute video on social media. The clip immediately went viral, with more than 58 million views worldwide!

In this very personal and illuminating guide, the #1 New York Times bestselling author elaborates on those spontaneous remarks. His message is simple: You need to JUMP like your life depends on it—because it does—if you truly want a life of peace and abundance.

Jump explores seven vulnerable “seasons” in the Emmy Award-winner life: being homeless and living out of his car, flunking out of college, enduring the emotional turmoil of a second failed marriage, risking stability to pursue his dream of television stardom, overcoming the Miss Universe mishap, blending his family, and owing the Internal Revenue Service $20 million. Steve uses these uncomfortable moments to explain his core principles and teach you what it means to JUMP:

·         Identifying the lesson and the blessing in all that life brings our way;

·         Placing past mistakes in our rearview mirror and creating a fresh life story;

·         Taking responsibility in the face of adversity.

At the heart of this mesmerizing read is faith—the confidence in knowing that leaping will elevate our lives, and that we will be caught when we fall. Don’t stand on the cliff of life and watch others soar by, Steve tells us. If you take a leap of faith, God will open your parachute and “Give you life more abundantly.”

Life is an incredible journey. It’s not good enough to exist—you need to live. You need to JUMP—to take a leap of faith, a risk toward the rich life God has planned for you.

The author of Act Like a Success, Think Like a Success; Act Like a Lady, Think Like a Man; and Straight Talk, No Chaser, Steve Harvey began doing stand-up comedy in the mid-1980s. His success as a stand-up comedian led to the WB’s hit show The Steve Harvey Show, which has won multiple NAACP Image Awards. He was featured in Spike Lee’s film The Original Kings of Comedy. In addition to his nationally syndicated Steve Harvey Morning Show, Steve hosts a daily talk show on NBC, is the gameshow host for Family Feud and Celebrity Family Feud, and most recently NBC’s top rated new show, Little Big Shots. A philanthropist, he is the founder of the Steve and Marjorie Harvey Foundation. He lives in Atlanta, Georgia and Chicago, Illinois.

“My friend, Steve Harvey, has an amazing gift to inspire, encourage and motivate people toward their dreams. In his new book, Jump, he’ll show you through his own experiences, how to discover your gifts, envision your dreams and take the steps to become all you were created to be. He’s impacted my life, and I know Jump will impact yours.” — Joel Osteen, Pastor and New York Times Bestselling Author

This is the principle that spectators could never see from the grandstand of playing it safe! When in fact, anyone who’s ever done anything monumental in their lives knows, that sooner or later one has to stand on the brink of peril and promise. It is what one does on the precipice of opportunity that determines the outcome.
Steve Harvey shares with us what makes some ‘Jump’ while others turn sadly away only to eulogize the opportunity and bemoan the circumstances that discouraged them from action. Steve Harvey has done the leaping right before our eyes. Now he is committed to sharing the principles and preparations that he and others used to override their fears and surge into their unique destiny!
Your first JUMP is to read his book! It will make the next JUMP so much easier! — Bishop T.D. Jakes, #1 New York Times Bestselling Author