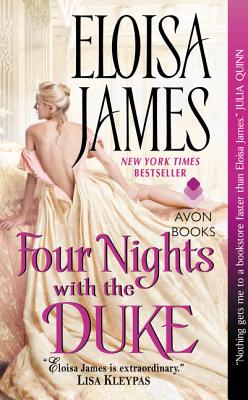 This is book number 8 in the Desperate Duchesses series.

As a young girl, Emilia Gwendolyn Carrington told the annoying future Duke of Pindar that she would marry any man in the world before him—so years later she is horrified to realize that she has nowhere else to turn.

Evander Septimus Brody has his own reasons for agreeing to Mia's audacious proposal, but there's one thing he won't give his inconvenient wife: himself.

Instead, he offers Mia a devil's bargain . . . he will spend four nights a year with her. Four nights, and nothing more. And those only when she begs for them.

Which Mia will never do.

Now Vander faces the most crucial challenge of his life: he must seduce his own wife in order to win her heart—and no matter what it takes, this is the one battle he can't afford to lose.

Eloisa James is a USA Today and New York Times bestselling author and professor of English literature, who lives with her family in New York, but can sometimes be found in Paris or Italy. She is the mother of two and, in a particularly delicious irony for a romance writer, is married to a genuine Italian knight. Visit her at www.eloisajames.com.

“another brilliantly executed historical romance that splendidly showcases her flair for faultless plotting and flawless character development. Much of the novel’s sparkling wit is associated with the heroine’s secret life as a best-selling romance novelist” — Booklist (starred review)

“James proves that wit is sexy and romance is smart. Her latest Desperate Duchesses novel does it again with an unforgetable heroine, a masterful hero and a very wise little boy. This is a wonderful story filled with emotion. A real keeper.” — RT Book Reviews (top pick)