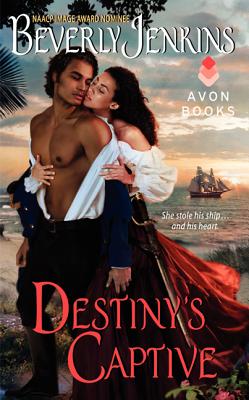 This is book number 3 in the Destiny Trilogy series.

In national bestselling author Beverly Jenkins' Destiny series, the Yates men play hard and live hard. And when they find that special woman, they fall hard . . .

Noah Yates fully believes in the joys of a happy family and a good wife. But that's not the life for him. No, he would much rather sail the wild seas in search of adventure, not tied down. But then the unthinkable happens . . . he finds himself literally tied down. To a bed. By a woman.

And Pilar isn't just an ordinary woman. She's descended from pirates. And after giving him one of the worst nights of his life, she steals his ship! Now Noah is on the hunt, and he'll stop at nothing to find this extraordinary woman . . . and make her his.

“Each book by Jenkins is better than the last.” — Romantic Times BOOKclub

“Jenkins is a gifted storyteller who knows how to bring special spark and sass to romance.” — Romantic Times BOOKclub

Material in the genre of African-American historical romance is not plentiful, but Jenkins is the pre-eminent voice. She delivers another gem with this first in her new Destiny series. — Romantic Times BOOKclub praise for DESTINY'S EMBRACE

“A story like non other, and done in a way that only Beverly Jenkins can do. Simply superb!” — Brenda Jackson, New York Times bestselling author