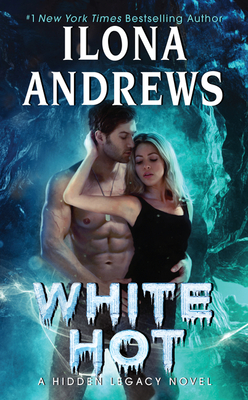 Nevada Baylor has a unique and secret skill—she knows when people are lying—and she's used that magic (along with plain, hard work) to keep her colorful and close-knit family's detective agency afloat. But her new case pits her against the shadowy forces that almost destroyed the city of Houston once before, bringing Nevada back into contact with Connor "Mad" Rogan.

Rogan is a billionaire Prime—the highest rank of magic user—and as unreadable as ever, despite Nevada’s “talent.” But there’s no hiding the sparks between them. Now that the stakes are even higher, both professionally and personally, and their foes are unimaginably powerful, Rogan and Nevada will find that nothing burns like ice …

“Ilona Andrews” is the pseudonym for a husband-and-wife writing team. Ilona is a native-born Russian, and Gordon is a former communications sergeant in the U.S. Army. Contrary to popular belief, Gordon was never an intelligence officer with a license to kill, and Ilona was never the mysterious Russian spy who seduced him. They met in college, in English Composition 101, where Ilona got a better grade. (Gordon is still sore about that.) They have co-authored four New York Times and USA Today bestselling series: the urban fantasy of Kate Daniels, rustic fantasy of the Edge, paranormal romance of Hidden Legacy, and Innkeeper Chronicles. They live in Texas with their two children and many dogs and cats.

“Her magical worldbuilding is brilliant and compelling. […] Add breathtaking romance and sexual tension plus a complex, layered plot, and you have a book that’s hard to put down. An enthralling paranormal romance from a master of the genre.” — Kirkus Reviews (starred review)

“If you want books that are jam-packed with thrills, complexity and deep human emotions, no one does it better or more consistently than Andrews…There is no better way to spend your reading time!” — RT Book Reviews (top pick)