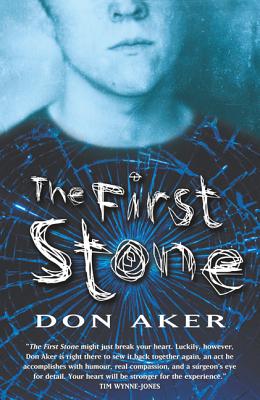 Reef is a troubled sixteen-year-old, who likes to smoke pot and drink with his friends in a derelict abandoned building. He also likes to throw stones from bridges over roads. There’s a reason he throws stones - stemming from an abusive childhood - but one of his stones ends up smashing the windshield of seventeen-year-old Leeza Hemming’s car, causing a horrific accident and landing Leeza in a hospital for three months, learning to walk again. Meanwhile, Reef faces charges in court and ends up being sentenced to a group home, where he will have to attend classes and volunteer at a rehabilitation center. Because of some fluke in the assignment, he ends up volunteering with Leeza - they both don’t know who each other is - and they start to help each other face life. Ironically, Reef is the key to Leeza’s recovery, and vice versa. Then Leeza’s mother walks in her daughter’s hospital room and recognizes Reef from the courtroom…

DON AKER is the author of The Space Between, winner of the Canadian Library Association’s Honour Book Award; One on One, winner of the Canadian Authors Association Lilla Stirling Award; and The First Stone, winner of the Ann Connor Brimer Award and the White Pine Award. His novels The Fifth Rule and Running on Empty were also White Pine Award finalists. A teacher for over twenty years and the father of two daughters, Don lives with his wife on Nova Scotia’s Bay of Fundy shoreline. Visit him online at donaker.com.