The Nazi Officer's Wife: How One Jewish Woman Survived the Holocaust (Paperback) 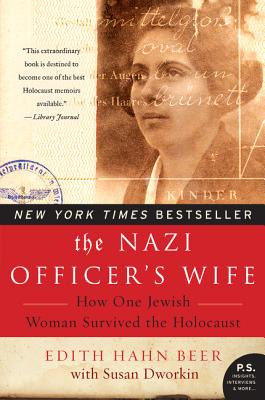 Edith Hahn was an outspoken young woman in Vienna when the Gestapo forced her into a ghetto and then into a slave labor camp. When she returned home months later, she knew she would become a hunted woman and went underground. With the help of a Christian friend, she emerged in Munich as Grete Denner. There she met Werner Vetter, a Nazi Party member who fell in love with her. Despite Edith's protests and even her eventual confession that she was Jewish, he married her and kept her identity a secret.

In wrenching detail, Edith recalls a life of constant, almost paralyzing fear. She tells how German officials casually questioned the lineage of her parents; how during childbirth she refused all painkillers, afraid that in an altered state of mind she might reveal something of her past; and how, after her husband was captured by the Soviets, she was bombed out of her house and had to hide while drunken Russian soldiers raped women on the street.

Despite the risk it posed to her life, Edith created a remarkable record of survival. She saved every document, as well as photographs she took inside labor camps. Now part of the permanent collection at the Holocaust Memorial Museum in Washington, D.C., these hundreds of documents, several of which are included in this volume, form the fabric of a gripping new chapter in the history of the Holocaust—complex, troubling, and ultimately triumphant.

Born in Vienna in 1914, Edith Hahn Beer lived in Netanua, Israel, until her death in 2009. She and Warner Vetter divorced in 1947. Her daughter, Angela, lives in London and is believed to be the only Jew born in a Reich hospital in 1944.

Acclaimed writer Susan Dworkin is the author of many books, including the memoir The Nazi Officer’s Wife with Edith Hahn Beer, the novel Stolen Goods, the novel-musical The Book of Candy, the self-help book The Ms. Guide to a Woman’s Health with Dr. Cynthia W. Cooke, and the film studies Making Tootsie and Double De Palma. She wrote the Peabody Award-winning TV documentary She's Nobody’s Baby: American Women in the 20th Century and was a longtime contributing editor to Ms. Magazine. She lives in New Jersey.

Bess Myerson now devotes her time mainly to advocacy in the area of women’s health research and treatment, consumerism, education, and peace in the Middle East. She is on the National Advisory Board of the State of Israel Bonds, a member of the “Share” Board and a trained facilitator working with ovarian cancer survivors, and one of the founders of the Museum of Jewish Heritage. She lives in New York City.

“In a well-written narrative that reads like a novel, she relates the escalating fear and humiliating indignities she and others endured, as well as the antisemitism of friends and neighbors. . . . Her story is important both as a personal testament and as an inspiring example of example of perseverance in the face of terrible adversity”. — Publishers Weekly

“In setting down her own tale of surivival...Edith Han Beer provides a fascinating addition to the testimonial literature.” — Dallas Morning News

“This extraordinary book is destined to become one of the best Holocaust memoirs available.” — Library Journal