Because of Miss Bridgerton: A Bridgerton Prequel (Mass Market) 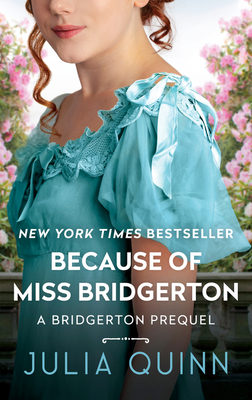 This is book number 1 in the Bridgerton Prequel series.

Sometimes you find love in the most unexpected of places...

This is not one of those times.

Everyone expects Billie Bridgerton to marry one of the Rokesby brothers. The two families have been neighbors for centuries, and as a child the tomboyish Billie ran wild with Edward and Andrew. Either one would make a perfect husband... someday.

Sometimes you fall in love with exactly the person you think you should...

There is only one Rokesby Billie absolutely cannot tolerate, and that is George. He may be the eldest and heir to the earldom, but he’s arrogant, annoying, and she’s absolutely certain he detests her. Which is perfectly convenient, as she can’t stand the sight of him, either.

But sometimes fate has a wicked sense of humor...

“Powered by a surfeit of dazzling wit and graced with a cast of unforgettable characters, Because of Miss Bridgerton is top-drawer, polished-to-perfection Quinn that will most certainly be savored by both longtime fans and new readers alike.” — Booklist (starred review)

“Quinn is incomparable! The latest addition to her beloved Bridgerton series is funny, charming, witty and wildly romantic. This is Regency romance at its best, with strong characters, fast-paced action and lots of drama between two unlikely sweethearts destined for each other.” — RT Book Reviews (top pick) on Because of Miss Bridgerton

“For all the Bridgerton family fans who worried the series was over once all the siblings stories were told, prepare to rejoice! Fans will not be disappointed.” — San Francisco Book Review on Because of Miss Bridgerton

“Julia Quinn simply writes great heroines who march to the beat of a different drummer, while keeping them grounded in reality. The fact that she manages to write them such amazing heroes—all with the wit she’s renowned for—only serves to make her books better. Because of Miss Bridgerton definitely does not disappoint; instead, it reaffirms my belief that Julia Quinn is one of the best historical romance novelists of our time.” — Heroes and Heartbreakers

“This lively, effervescent Georgian tale takes place a generation before Quinn’s wildly popular Bridgerton series and nicely adds to the family history.” — Library Journal on Because of Miss Bridgerton