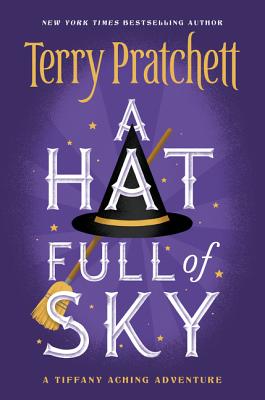 This is book number 2 in the Tiffany Aching series.

Tiffany Aching is ready to begin her apprenticeship in magic. She expects spells and magic—not chores and ill-tempered nanny goats! Surely there must be more to witchcraft than this.

What Tiffany doesn't know is that an insidious, disembodied creature is pursuing her. This time, neither Mistress Weatherwax (the greatest witch in the world) nor the fierce, six-inch-high Wee Free Men can protect her. In the end, it will take all of Tiffany's inner strength to save herself . . . if it can be done at all.

'A Hat Full of Sky continues Terry Pratchett’s brilliant look into the world of a young witch: this time, with more angst.' (Fantasy Book Review)

Winner of the Mythopoeic Fantasy Award for Adolescent Literature

“Wonderful language, genuinely scary explorations and a young girl whose growing up is believable and exciting.” — Chicago Tribune

“The humor races from cerebral to burlesque without dropping a stitch. Astonishing.” — Horn Book (starred review)

“Tiffany is Hermione Granger, Gaiman’s Coraline, and Pullman’s Lyra Belacqua rolled into one. A great adventure with plenty of magic and laughs.” — Voice of Youth Advocates (VOYA) (starred review)

“By turns hilarious and achingly beautiful, this be just right.” — Kirkus Reviews

“Readers will curl up to read with a sigh of contentment.” — Bulletin of the Center for Children’s Books

“Full of irreverent humor, laugh-out-loud dialogue, and many memorable characters. Fans of the previous book are in for another treat.” — School Library Journal