Republican Like Me: How I Left the Liberal Bubble and Learned to Love the Right (Hardcover) 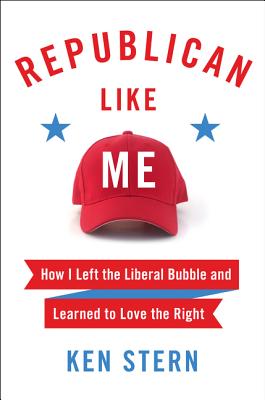 In this controversial National Bestseller, the former CEO of NPR sets out for conservative America wondering why these people are so wrong about everything. It turns out, they aren’t.

Ken Stern watched the increasing polarization of our country with growing concern. As a longtime partisan Democrat himself, he felt forced to acknowledge that his own views were too parochial, too absent of any exposure to the “other side.” In fact, his urban neighborhood is so liberal, he couldn’t find a single Republican--even by asking around.

So for one year, he crossed the aisle to spend time listening, talking, and praying with Republicans of all stripes. With his mind open and his dial tuned to the right, he went to evangelical churches, shot a hog in Texas, stood in pit row at a NASCAR race, hung out at Tea Party meetings and sat in on Steve Bannon’s radio show. He also read up on conservative wonkery and consulted with the smartest people the right has to offer.

What happens when a liberal sets out to look at issues from a conservative perspective? Some of his dearly cherished assumptions about the right slipped away. Republican Like Me reveals what lead him to change his mind, and his view of an increasingly polarized America.

Ken Stern is the president of Palisades Media Ventures and the author of With Charity for All: Why Charities Are Failing and a Better Way to Give. He was formerly the CEO of NPR. He lives in Washington, DC.

At a time when most people can’t be bothered to listen to their political opponents, Ken Stern choose to live among them. The result is insightful and generous and refreshing. He can shoot with me any time.  — TUCKER CARLSON

“Ken Stern did a gutsy thing, poking his head outside his own bubble, and then inhaling. His chronicle of discovery of how the other (political, cultural) half lives is honest, insightful, cheerfully self-deprecating, and quite often hilarious.” — JOHN DONVAN, bestselling author of In a Different Key: The Story of Autism and host of Intelligence Squared US

“Republican Like Me is a marvelous book—engaging and thoughtful, timely and textured, a model for how to approach politics in this angry and polarized age. Ken Stern is a liberal who decided to spend a year understanding conservatives rather than demeaning them. The result is fascinating journey, told through stories, analysis, and evidence. It is a humanizing and generous book, showing us that our political opponents need not be our political enemies. Sometimes we can even learn from them. Whether you’re on the Left or the Right, you’ll be smarter and wiser after reading Republican Like Me. Ken Stern was changed in the course of writing this book. You’ll be changed by reading it.” — PETER WEHNER, senior fellow at the Ethics and Public Policy Center; contributing opinion writer for the New York Times; senior adviser in the George W. Bush White House