The War on Small Business: How the Government Used the Pandemic to Crush the Backbone of America (Hardcover) 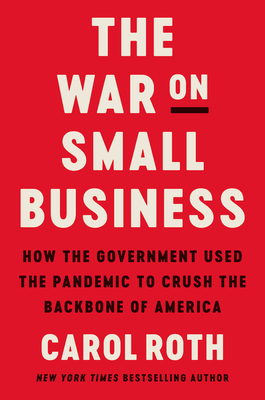 For years, government bureaucrats have been looking for ways to destroy small businesses. With coronavirus, they finally had their chance.

In 2020, the American economy suffered the biggest financial collapse in history. But while Main Street suffered like never before, the stock market continued to reach new highs. How could this be? The answer is that government had slapped oppressive restrictions on small businesses while propping up Wall Street and engineering a historic consolidation of power and wealth.

This isn’t a new problem. During the last financial crisis, Washington bailed out large banks, saying they were “too big to fail.” When the federal government finally pushed out the CARES Act in 2020, it clearly favored the wealthy and well-connected, showing that small businesses were too small to matter. People across the political spectrum constantly complain about the tyranny of big business, and they’re not wrong. However, too many think government is the solution. In reality, government is the problem.

In The War on Small Business, entrepreneur Carol Roth unveils the many abuses of power inflicted on small businesses during the COVID-19 pandemic. Small business owners were thrown in jail for trying to make a living. Individual rights were discarded. Big government did what it does best—intentionally protect the rich and powerful.

This is the most underreported story coming out of the pandemic. The government chose winners and losers, who would thrive and who would fight to survive, based on not data or science, but based on clout and connections. This enabled the government, with the aid of the Federal Reserve, to oversee the largest wealth transfer in history from Main Street to Wall Street. The issues started long ago and continue today with a highly tilted playing field that favors those “in the club” to the detriment of the average Americans.

This book is about the Davids vs. the Goliaths and the decentralization that can help the small, independent businesses and individuals participate in wealth creation.

If Americans don’t wake up and stop it, politicians will continue to produce policies that intensify their war on small business and individuals and all that stands in the way of centralized power and control.

Carol Roth is a “recovering” investment banker, entrepreneur, TV pundit and host, and New York Times bestselling author of The Entrepreneur Equation. She has worked in a variety of capacities across industries, including currently as an outsourced CCO, as a director on public and private company boards, and as a strategic advisor. She advocates for small business, small government, and big hair.

“One of the great tragedies of the pandemic is the way it was utilized by governments to crush the dreams of small-business owners, who were treated as selfish afterthoughts by power-hungry politicians. In this book, Carol Roth details just how our political class abandoned small-business owners in favor of cronies. It’s a vital book.” — Ben Shapiro, bestselling author of How to Destroy America in Three Easy Steps and The Authoritarian Moment

“For all the pretending that it aims to do the opposite, the government has worked to weaken small business for decades. In retrospect, it should be no great surprise that small businesses bore a disproportionate brunt of the COVID-19 shutdowns. In The War on Small Business, Carol Roth breaks down with agonizing precision how politicians propped up powerful corporations while turning their backs on the little guy.” — Sharyl Attkisson, bestselling author of Slanted

“It’s no secret that the pandemic has left a lasting and devastating impact on small businesses across America. Leave it to Carol Roth to say lots of those businesses didn’t die. They were murdered, by a deliberate and targeted war on their independence and very livelihoods. She lays bare the concerted carving up of our capitalist ideals and free market, meticulously planned, ruthlessly delivered. Be warned, this book is not for the faint of heart, but it is must-reading for those who still have a heart.” — Neil Cavuto, anchor and senior vice president of Fox News Channel and Fox Business Network

“In The War on Small Business, Carol Roth exposes how Congress let its desire for central planning and payback for their wealthiest supporters supersede their duty to serve the majority of the US electorate. Those who needed assistance least got more, and those who truly needed help saw their chance at the American Dream vanish as the ‘fourteen days to flatten the curve’ dragged on for nearly a year, closing hundreds of thousands of small businesses forever. It’s a story Stephen King could have written, but it would have been too dark a tale for the horror master.” — Jon Najarian, cofounder of Market Rebellion and CNBC contributor

“Carol Roth is one of the nation’s most thoughtful financial minds. When California passed AB5—the disastrous law that crippled independent contracting and small business—Carol was one of the few national personalities sounding the alarm. Carol doesn’t pull any punches when it comes to the dire situation facing American small businesses and freelancers, but she never fails to add a layer of hope. The American Dream is under duress, but this book shines a light in the dark places that need to be illuminated so that small-business America can start dreaming once more.” — Kira Davis, host of Just Listen to Yourself and editor-at-large of Redstate

“As a restaurant owner, I had a front-row seat to the destruction of small businesses throughout the pandemic. I watched as two sets of rules were doled out—one for massive corporations and a separate, more oppressive set for those struggling ‘mom and pop’s. The War on Small Business is such a valuable read, as Carol Roth gives you an honest and detailed look at how quickly a level playing field can be destroyed as government taints the free market with corporate preference.” — Andrew Gruel, CEO of Slapfish Restaurant Group and television host