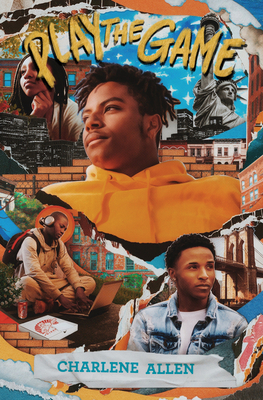 From debut author Charlene Allen comes a captivating YA contemporary mystery and coming-of-age story, celebrating the power of friendship, first love, and exploring the criminal justice system from the lens of restorative justice. Perfect for fans of Tiffany D. Jackson, Nic Stone, and Maureen Johnson.

In the game of life, sometimes other people hold all the controls. Or so it seems to VZ. Four months have passed since his best friend Ed was killed by a white man in a Brooklyn parking lot.

When Singer, the man who killed Ed, is found dead in the same spot where Ed was murdered, all signs point to Jack, VZ’s other best friend, as the prime suspect.

VZ’s determined to complete the video game Ed never finished and figure out who actually killed Singer. With help from Diamond, the girl he’s crushing on at work, VZ falls into Ed’s quirky gameiverse. As the police close in on Jack, the game starts to uncover details that could lead to the truth about the murder.

Can VZ honor Ed and help Jack before it’s too late?

Charlene Allen works with community organizations to heal trauma and fight injustice, especially the beast called mass incarceration. She received her MFA from The New School, her JD from Northeastern University, and her BA from the University of Massachusetts at Amherst. She lives in Brooklyn with her fabulous family and their very silly dog. Play the Game is her debut novel. You can visit her at www.charleneallen.com.

"A compelling look at different ways of approaching grief and justice." — Kirkus Reviews

“Powerful. Authentic. A riveting gut punch. This is how you galvanize young activists. A voice not soon to be forgotten.”  — Tiffany D. Jackson, New York Times bestselling author of The Weight of Blood

“Honest, raw, and absolutely alive. Play the Game is a tour de force, and Charlene Allen has announced herself as a powerful new voice." — Matt de la Peña, author of Mexican WhiteBoy and Last Stop on Market Street

“Fast-paced, insightful, and highly relevant, Allen’s novel illustrates the application of restorative justice practices to real life situations. A must read for all young people impacted by racism and those adults who love them.”
— Angela Y. Davis, Distinguished Professor Emerita, UC Santa Cruz