Off the Deep End: Jerry and Becki Falwell and the Collapse of an Evangelical Dynasty (Large Print / Paperback) 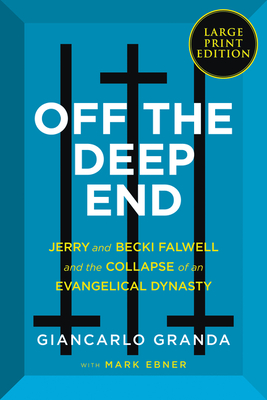 Giancarlo Granda finally reveals the truth about his relationship with Becki Falwell and her husband Jerry Falwell Jr., and the hidden world of political influence, high finance, and criminal intrigue.

Jerry Falwell Jr. is a prominent figure in the evangelical world whose support for presidential candidate Donald J. Trump helped secure Trump's Republican nomination in 2016. He captured headlines when it was revealed that he and his wife Becki had participated in a years-long bizarre sexual relationship with a pool attendant they met at the Fountainbleu Hotel in Miami Beach. As Falwell Jr. began to deny this relationship, even more damaging news came out, ultimately forcing him to resign as president of Liberty University, which many consider to be the largest evangelical Christian university in the world.

Giancarlo Granda is now ready to share the story of his years on an "only in America" rollercoaster ride through the monied corridors of power and profound hypocrisy.

The proud son of immigrant parents from Cuba and Mexico, Giancarlo Granda was born and raised in Miami, and currently resides in the DC metro area. He is active in the Brazilian Jiu-Jitsu and Muay Thai communities, and enjoys traveling, hiking, skiing, weightlifting, gaming, and time well spent with friends and family. He recently received his Master of Professional Studies in Real Estate Finance and Development degree from Georgetown University.