Knocked Out by My Nunga-Nungas: Further, Further Confessions of Georgia Nicolson (Hardcover) 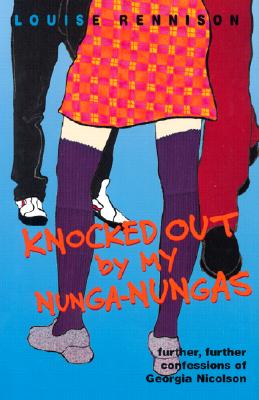 This is book number 3 in the Confessions of Georgia Nicolson series.

As I was going out of my bedroom door I remembered my nungas. Perhaps I should take some precautions to keep them under strict control. Maybe bits of Sellotape on the ends of them to keep them from doing anything alarming? I'd like to trust them, but they are very unreliable.

The irrepressible heroine of the Michael L. Printz Honor Book Angus, Thongs and Full-Frontal Snogging is back, and funnier than ever! Georgia has finally landed Robbie the Sex God, but he's never around, and Georgia's ex, Dave the Laugh, is starting to look quite dreamy. Strangely, so does just about every other guy Georgia meets, even the new French teacher.

In this third installment of Georgia's hilarious confessions, Georgia's "red bottomosity" is out of control! Whatever will happen next?