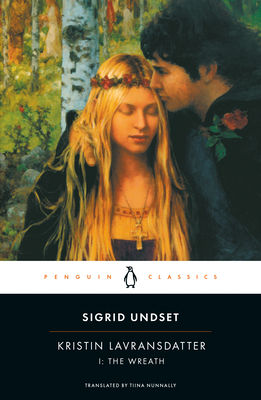 This is book number 1 in the The Kristin Lavransdatter Trilogy series.

“[Sigrid Undset] should be the next Elena Ferrante.” —Slate

Kristin Lavransdatter interweaves political, social, and religious history with the daily aspects of family life to create a colorful, richly detailed tapestry of Norway during the fourteenth-century. The trilogy, however, is more than a journey into the past. Undset's own life—her familiarity with Norse sagas and folklore and with a wide range of medieval literature, her experiences as a daughter, wife, and mother, and her deep religious faith—profoundly influenced her writing. Her grasp of the connections between past and present and of human nature itself, combined with the extraordinary quality of her writing, sets her works far above the genre of "historical novels." This new translation by Tina Nunnally—the first English version since Charles Archer's translation in the 1920s—captures Undset's strengths as a stylist. Nunnally, an award-winning translator, retains the natural dialog and lyrical flow of the original Norwegian, with its echoes of Old Norse legends, while deftly avoiding the stilted language and false archaisms of Archer's translation. In addition, she restores key passages left out of that edition.

Undset's ability to present a meticulously accurate historical portrait without sacrificing the poetry and narrative drive of masterful storytelling was particularly significant in her homeland. Granted independence in 1905 after five hundred years of foreign domination, Norway was eager to reclaim its national history and culture. Kristin Lavransdatter became a touchstone for Undset's contemporaries, and continues to be widely read by Norwegians today. In the more than 75 years since it was first published, it has also become a favorite throughout the world.

Sigrid Undset (1882–1949) was born in Denmark, the eldest daughter of a Norwegian father and a Danish mother. Two years after her birth, the family moved to Oslo, where her father, a distinguished archaeologist, taught at the university. Her father’s interest in the past had a tremendous influence on Undset. She was particularly entranced by the dramatic Old Norse sagas she read as a child, later declaring that her exposure to them marked “the most important turning point in my life.”

Undset’s first published works—the novel Mrs. Marta Oulie (1907) and a short-story collection, The Happy Age (1908)—were set in contemporary times and achieved both critical and popular success.
With her reputation as a writer well-established, Undset had the freedom to explore the world that had first fired her imagination, and in Gunnar's Daughter (1909) she drew upon her knowledge of Norway's history and legends, including the Icelandic Sagas, to recreate medieval life with compelling immediacy. In 1912, Undset married the painter Anders Castus Svarstad and over the next ten years faced the formidable challenge of raising three stepchildren and her own three off-spring with little financial or emotional support from her husband. Eventually, she and her children moved from Oslo to Lillehammer, and her marriage was annulled in 1924, when Undset converted to Catholicism.

Although Undset wrote more modern novels, a collection of essays on feminism, as well as numerous book reviews and newspaper articles, her fascination with the Middle Ages never ebbed, and in 1920 she published The Wreath, the first volume of her most famous work, Kristin Lavransdatter. The next two volumes quickly followed—The Wife in 1921, and The Cross in 1922. The trilogy earned Undset worldwide acclaim, and her second great medieval epic—the four-volume The Master of Hestviken (1925–1927)—confirmed her place as one of the twentieth century’s greatest writers. In 1928, at the age of 46, she received the Nobel Prize in Literature, only the third woman to be so honored.

Undset went on to publish more novels—including the autobiographical The Longest Years—and several collections of essays during the 1930s. As the Germans advanced through Norway in 1940, Undset, an outspoken critic of Nazism, fled the country and eventually settled in Brooklyn, New York. She returned to her homeland in 1945, and two years later she was awarded Norway’s highest honor for her “distinguished literary work and for service to her country.” The years of exile, however, had taken a great toll on her, and she died of a stroke on June 10, 1949.

By the Winner of the Nobel Prize in Literature

“[Sigrid Undset] should be the next Elena Ferrante . . . whose huge commercial success suggests there is a market for series in translation about fierce, complicated women navigating their culturally conservative European milieu. . . . If HBO is looking for its next miniseries, it should give Kristin Lavransdatter the proper adaptation it deserves. Rereading the trilogy this fall, I kept thinking of Olive Kitteridge, another powerful novel about a prickly mother turned into a worthy HBO miniseries. This trilogy includes illicit sex, affairs, a church fire, an attempted rape, ocean voyages, rebellious virgins cooped up in a convent, predatory priests, an attempted human sacrifice, floods, fights, murders, violent suicide, a gay king, drunken revelry, the Bubonic Plague, deathbed confessions, and sex that makes its heroine ache ‘with astonishment—that this was the iniquity that all the songs were about.’ ” —Ruth Graham, Slate

“[My favorite fictional hero or heroine is] probably Sigrid Undset’s strong-willed, sensual, self-destructive and ultimately rock-solid Kristin Lavransdatter. . . . Kristin’s eponymous trilogy bears many rereadings. Right away one somehow identifies with this daughter of medieval Norway; soon one compassionates her in her sufferings. . . . For all her faults [she] inspires love in many around her, including this reader. Her faith and loyalty make her quite beautiful to me. Like Murasaki and Dos Passos, Undset tells the story of a whole life.” —William T. Vollman, The New York Times Book Review

“We consider it the best book our judges have ever selected and it has been better received by our subscribers than any other book.” —Book-of-the-Month Club

“The finest historical novel our 20th century has yet produced; indeed it dwarfs most of the fiction of any kind that Europe has produced in the last twenty years.” —Contemporary Movements in European Literature

“As a novel it must be ranked with the greatest the world knows today.” —Montreal Star

“Sigrid Undset’s trilogy embodies more of life, seen understandingly and seriously . . . than any novel since Dostoevsky's Brothers Karamazov. It is also very probably the noblest work of fiction ever to have been inspired by the Catholic art of life.” —Commonweal

“The first great story founded upon the normal events of a normal woman’s existence. It is as great and as rich, as simple and as profound, as such a story should be.” —Des Moines Register

“No other novelist, past or present, has bodied forth the medieval world with such richness and fullness of indisputable genius. . . . One of the finest minds in European literature.” —New York Herald Tribune

“A master . . . writing in a prose as vigorous, articulate and naturalistic as the novel it re-creates, Tiina Nunnally brilliantly captures a world both remote and strangely familiar.” —Judges’ citation, PEN/Book-of-the-Month Club Translation Prize