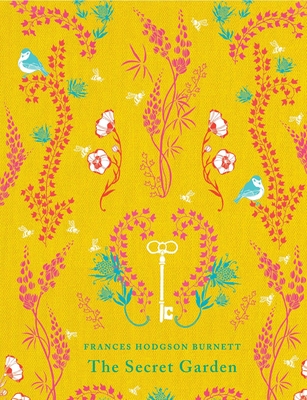 The Secret Garden by Frances Hodgson Burnett is a magical novel for adults and children alike 'I've stolen a garden,' she said very fast. 'It isn't mine. It isn't anybody's. Nobody wants it, nobody cares for it, nobody ever goes into it. Perhaps everything is dead in it already; I don't know.' After losing her parents, young Mary Lennox is sent from India to live in her uncle's gloomy mansion on the wild English moors. She is lonely and has no one to play with, but one day she learns of a secret garden somewhere in the grounds that no one is allowed to enter. Then Mary uncovers an old key in a flowerbed - and a gust of magic leads her to the hidden door. Slowly she turns the key and enters a world she could never have imagined. ***Now in a beautiful clothbound cover*** ***With a heartwarming introduction by Sophie Dahl*** *** A behind-the-scenes jounrey, including an author profile, a guide to who's who, activities and more...*** Frances Hodgson Burnett (1849-1924) was born in Manchester. She had a very poor upbringing and used to escape from the horror of her surroundings by writing stories. In 1865 her family emigrated to the USA where she married and became the successful author of many children's books including Little Lord Fauntleroy and A Little Princess.

Frances Hodgson Burnett lived from 1849 to 1924. She was born in Manchester and lived in great poverty after the death of her father in 1853. She escaped the horror of her surroundings by writing stories and often returned to a rags-to-riches or a riches-to-rags theme. In 1865 her family accepted a relative’s invitation to emigrate to America. They were still poor but the wide open spaces of Tennesssee were better than the slums of Manchester. Frances had to earn money so began writing short pieces for American magazines. In 1873 she married Dr Swan Burnett, and it was under her married name that she became a world-famous children’s writer.

Frances Hodgson Burnett wrote over forty books; the two that are best-known today are The Secret Garden and Little Lord Fauntleroy. In later life she became rather eccentric, turned to spiritualism and mystic cults and took to wearing frilly clothes and titian-coloured wigs – this earned her the nickname ‘Fluffy’.

“It is only the exceptional author who can write a book about children with sufficient skill, charm, simplicity, and significance to make it acceptable to both young and old. Mrs. Burnett is one of the few thus gifted.”—The New York Times