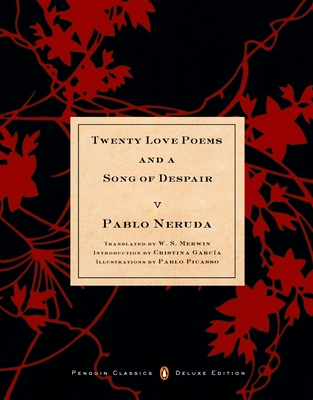 Brilliant English translation of beloved poems by Pablo Neruda, who is the subject of the film Neruda starring Gael García Bernal and directed by Pablo Larraín

First published in 1924, Veinte poemas de amor y una canción desesperada remains among Pablo Neruda’s most popular work. Daringly metaphorical and sensuous, this collection juxtaposes youthful passion with the desolation of grief. Drawn from the poet’s most intimate and personal associations, the poems combine eroticism and the natural world with the influence of expressionism and the genius of a master poet. This edition features the newly corrected original Spanish text, with masterly English translations by award-winning poet W. S. Merwin on facing pages.

Neftali Ricardo Reyes, whose pseudonym was to be Pablo Neruda, was born in Parral, Chile, in 1904. He grew up in the pioneer town of Temuco, briefly encountering Gabriela Mistral, who taught there for a time. In 1920 he went to Santiago to study, and the following year published his first collection of poetry,La Cancion de la Fiesta. A second collection, Crepusculario, brought him critical recognition; and in 1924 the hugely successful Veinte Poemas de Amor y una Cancion Desesperada appeared. From 1927 to 1943, Neruda lived abroad, serving as a diplomat in Rangoon, Colombo, Batavia, Singapore, Buenos Aires, Barcelona, Madrid, Paris, and Mexico City. This is the period that saw the publication of the first two volumes of his celebrated Residencia en la Tierra. He joined the Communist Party of Chile after World War II, was prosecuted as a subversive, and began an exile that took him to Russia, Eastern Europe, and China. Already the most renowned Latin American poet of his time, he returned to Chile in 1952. He died there in 1973, having just seen the fourth edition of his Obras Completas through the press. In receiving the Nobel Prize in 1971, he had said that the poet must achieve a balance “between solitude and solidarity, between feeling and action, between the intimacy of one's self, the intimacy of mankind, and the relevation of nature.”

W. S. Merwin (translator; 1927–2019) published many highly regarded books of poems, for which he received a number of distinguished awards—the Pulitzer Prize (twice), the National Book Award, the Bollingen Prize, a Fellowship of the Academy of American Poets, and the Governor's Award for Literature of the state of Hawaii among them. The U.S. poet laureate from 2010 to 2011, he translated widely from many languages, and his versions of classics such as The Poem of the Cid and The Song of Roland are standards.

Cristina García (introducer) is the author of Dreaming in Cuban, which was nominated for the National Book Award.

By the Winner of the Nobel Prize in Literature