The Liberal Hour: Washington and the Politics of Change in the 1960s (Paperback) 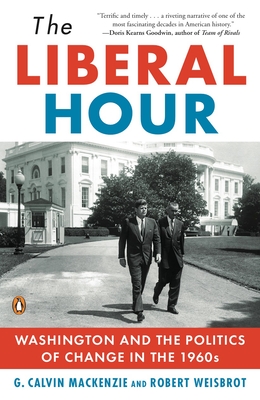 Provocative and incisive , The Liberal Hour reveals how Washington, so often portrayed as a target of reform in the 1960s, was in fact the era's most effective engine of change. The movements of the 1960s have always drawn the most attention from the decade's chroniclers, but it was in the halls of government-so often the target of protesters' wrath-that the enduring reforms of the era were produced. With nuance and panache, Calvin Mackenzie and Robert Weisbrot present the real-life characters-from giants like JFK and Johnson to lesser-known senators and congressmen-who drove these reforms and were critical to the passage of key legislation. The Liberal Hour offers an engrossing portrait of this extraordinary moment when more progressive legislation was passed than in almost any other era in American history.

" This is a terrific and timely book-a riveting narrative of one of the most fascinating decades in American history."
-Doris Kearns Goodwin, author of Team of Rivals

"A valuable corrective to a lot of hackneyed thinking about the significance of the '60s."
-The New York Times