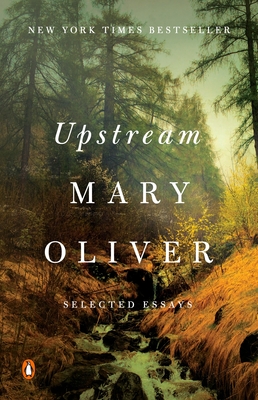 One of O, The Oprah Magazine’s Ten Best Books of the Year

“There's hardly a page in my copy of Upstream that isn't folded down or underlined and scribbled on, so charged is Oliver's language . . .” —Maureen Corrigan, NPR’s Fresh Air

“Uniting essays from Oliver’s previous books and elsewhere, this gem of a collection offers a compelling synthesis of the poet’s thoughts on the natural, spiritual and artistic worlds . . .” —The New York Times

“In the beginning I was so young and such a stranger to myself I hardly existed. I had to go out into the world and see it and hear it and react to it, before I knew at all who I was, what I was, what I wanted to be.”

So begins Upstream, a collection of essays in which revered poet Mary Oliver reflects on her willingness, as a young child and as an adult, to lose herself within the beauty and mysteries of both the natural world and the world of literature. Emphasizing the significance of her childhood “friend” Walt Whitman, through whose work she first understood that a poem is a temple, “a place to enter, and in which to feel,” and who encouraged her to vanish into the world of her writing, Oliver meditates on the forces that allowed her to create a life for herself out of work and love. As she writes, “I could not be a poet without the natural world. Someone else could. But not me. For me the door to the woods is the door to the temple.”

Upstream follows Oliver as she contemplates the pleasure of artistic labor, her boundless curiosity for the flora and fauna that surround her, and the responsibility she has inherited from Shelley, Wordsworth, Emerson, Poe, and Frost, the great thinkers and writers of the past, to live thoughtfully, intelligently, and to observe with passion. Throughout this collection, Oliver positions not just herself upstream but us as well as she encourages us all to keep moving, to lose ourselves in the awe of the unknown, and to give power and time to the creative and whimsical urges that live within us.

Born in a small town in Ohio, Mary Oliver published her first book of poetry in 1963 at the age of 28. Over the course of her long career, she received numerous awards. Her fourth book, American Primitive, won the Pulitzer Prize for Poetry in 1984. She led workshops and held residencies at various colleges and universities, including Bennington College, where she held the Catharine Osgood Foster Chair for Distinguished Teaching. She died in 2019.

“There's hardly a page in my copy of Upstream that isn't folded down or underlined and scribbled on, so charged is Oliver's language . . . I need a moment away from unceasing word drip of debates about the election, about whether Elena Ferrante has the right to privacy, about whether Bob Dylan writes 'Literature.' I need a moment, more than a moment, in the steady and profound company of Mary Oliver and I think you might need one too.” —Maureen Corrigan, NPR’s Fresh Air

“Uniting essays from Oliver’s previous books and elsewhere, this gem of a collection offers a compelling synthesis of the poet’s thoughts on the natural, spiritual and artistic worlds . . . With each page, the book gains accumulative power. The various threads intertwine and become taut.” —The New York Times

“When reading Mary Oliver in any form—poetry or prose—you oughtn't be surprised when suddenly you find yourself at a full stop. When you come across a sentence so arresting in its beauty—its construction, its word choice, its truths—you can't help but pause, hit "reread," and await the transformative soaking-in, the awakening of mind and soul that's sure to settle deeply. She never fails to stir us from whatever is the natural speck before our gaze to the immeasurable heaven's dome above and beyond.” —Chicago Tribune

“Upstream is a testament to a lifetime of paying attention, and an invitation to readers to do the same.” —Christian Science Monitor

“The richness of these essays—part revelation, part instruction—will prompt readers to dive in again and again.” —The Washington Post

“A tremendously vitalizing read . . . grounding and elevating at the same time.” —Brain Pickings

“Oliver immerses us in an ever-widening circle, in which a shrub or flower opens onto the cosmos, revealing our meager, masterful place in it. Hold Upstream in your hands, and you hold a miracle of ravishing imagery and startling revelation.” —Minneapolis Star Tribune

“Highly recommended as an entrée to Oliver’s works, this volume should also be required reading for artists of all kinds, not just writers, and especially aspiring creative minds.” —Library Journal (starred review)

“Distinguished, honored, prolific, popular, bestselling—adjectives that don’t always hang out together—describe Oliver’s body of work, nearly three dozen volumes of poetry and collections of prose. This group (19 essays, 16 from previous collections) is a distillation of sorts. Born of two 'blessings—the natural world, and the world of writing: literature,' it partakes of the spirits of a journal, a commonplace book, and a meditation. The natural world pictured here is richly various, though Oliver seems most drawn to waterways. All manner of aquatic life—shark and mackerel, duck and egret—accompany her days, along with spiders, foxes, even a bear. Her keen observations come as narrative (following a fox) or as manual (building a house) or as poems masquerading as description (“I have seen bluefish arc and sled across the water, an acre of them, leaping and sliding back under the water, then leaping again, toothy, terrible, lashed by hunger”). When the world of writing enters, currently unfashionable 19th-century writers emerge—Percy Shelley, William Wordsworth, William James—in readings that evade academic textual analyses and share the look-at-what-I-saw tone animating Oliver’s observations of the natural world. The message of her book for its readers is a simple and profound one: open your eyes.” —Publishers Weekly

“Part paean to nature and part meditation on the writing life, this elegant and simply written book is a neo-Romantic celebration of life and the pursuit of art that is sure to enchant Oliver's many admirers. A lyrical, tender essay collection.” —Kirkus