Acid Test: LSD, Ecstasy, and the Power to Heal (Paperback) 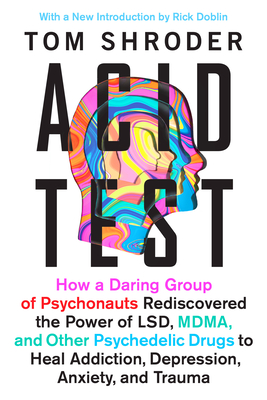 “A book that should start a long-overdue national conversation.” —Dave Barry

With the F.D.A. agreeing to new trials to test MDMA (better known as Ecstasy) as a treatment for PTSD—which, if approved, could be available as a drug by 2021—Acid Test is leading the charge in an evolving conversation about psychedelic drugs. Despite their current illegality, many Americans are already familiar with their effects. Yet while LSD and MDMA have proven extraordinarily effective in treating anxiety disorders such as PTSD, they still remain off-limits to the millions who might benefit from them. Through the stories of three very different men, award-winning journalist Tom Shroder covers the drugs’ roller-coaster history from their initial reception in the 1950s to the negative stereotypes that persist today. At a moment when popular opinion is rethinking the potential benefits of some illegal drugs, and with new research coming out every day, Acid Test is a fascinating and informative must-read.

Tom Shroder is an award-winning journalist, editor, and author of Old Souls and Acid Test, a transformative look at the therapeutic powers of psychedelic drugs in the treatment of PTSD. As editor of The Washington Post Magazine, he conceived and edited two Pulitzer Prize–winning feature stories. His most recent editing project, Overwhelmed: Work, Love, and Play When No One Has the Time, by Brigid Schulte, was a New York Times best-seller.

“Shroder filters the psychedelic world [and] presents a compelling case for supporting responsible, rigorous research of psychedelic compounds….Empty your mind of any preconceptions about psychedelic drugs and enjoy a fascinating trip through the politics, science, history, and promise of these controversial chemical compounds.”
—Booklist, STARRED REVIEW

“A well-respected journalist offers evidence, both empirical and anecdotal, about the therapeutic benefits of psychedelic drugs….this clear-eyed account [explores] both the complex history of the issue and the current thinking on the use of LSD, Ecstasy and other psychotropic substances for healing troubled minds….Occasionally, the stories are amusing…often, they’re moving…a perceptive criticism of the failings of America’s war on drugs, and Shroder delivers an important historical perspective on a highly controversial issue in modern medicine.”—Kirkus

“[Acid Test] explores the therapeutic possibilities of LSD and Ecstasy (MDMA), and, more broadly, the potential of the human mind….Guided by Shroder’s easy narrative tone, readers follow an activist, a marine, and a physician-turned-psychiatrist who developed a philosophy of psychedelic therapy through self-experimentation….Shroder both informs readers about the drugs’ shadowy pasts and provides insight into the future of mental health.”—Publishers Weekly

“This is not about the 60's. This book reveals the ongoing struggle to create valuable lasting therapies for PTSD in all its forms. Funny, hopeful, and sad by turns, these stories make me believe that someday soon, MDMA will be accepted as valuable, even desirable, to counteract the despair of so many returning veterans and other souls whose lives are turned upside down by PTSD.  If ever interventions are needed, it is now. Acid Test presents an alternative to anguish and anxiety, showing a route of return to balance by use of compassionate therapies along with an outlaw drug. Millions of Americans suffer from the terrors of war or crime , and perhaps soon, we can say help is on the way.”
—Carolyn Garcia, also known as Mountain Girl, a former Merry prankster and wife of Jerry Garcia

“Over the last thirty years women have gone from the kitchen to the boardroom, people of color from the woodshed to the White House, gay men and women from the closet to the altar, and all of us have embraced a new vision of life itself on this fragile blue planet. Yet when we recall the factors that unleashed these dramatic transformations there is one ingredient in the recipe of social change that is always expunged from the record: the fact that millions of us lay prostrate before the gates of awe having ingested LSD or some other psychedelic. Tom Shroder’s Acid Test is an inspiring and profoundly hopeful book.”
—Wade Davis, author of The Serpent and the Rainbow

“Tom Shroder has written a book that is at once captivating and utterly surprising, with mind-blowing revelations of a lost history. The scourge of war and trauma and the mysteries of human consciousness fills virtually every one of the gripping chapters. With its impressive research, masterful storytelling and ultimately, the possibility of hope and healing, Acid Test is destined to be an important book.”
—Brigid Schulte, author of Overwhelmed

“Acid Test is a breath of fresh air after half a century of general hysteria, misinformation, confusion and questionable decisions of scientific, political, and legal authorities concerning psychedelic substances. Tom Shroder's fascinating, well-researched, and clearly written account of psychedelic history, from the discovery of LSD to the current worldwide renaissance of interest in these remarkable substances and revival of research in this area, is a tour de force. Most important—socially, economically, and politically—is the book’s focus on the psychedelic newcomer MDMA (Ecstasy). The pilot studies of this substance suggest that it might play an important role in helping to solve the formidable problem of PTSD that kills more American soldiers than the weapons of enemies.”
—Stanislav Grof, M.D., author of LSD Psychotherapy, The Ultimate Journey, and Psychology of the Future

“I read Acid Test with wonder and excitement. Wonder at seeing a controversial topic through Tom Shroder's fresh and lucid eyes. And excitement at the promise of healing that he reveals.”
—David Von Drehle, author of Rise to Greatness: Abraham Lincoln and America's Most Perilous Year

“Tom Shroder weaves together three compelling stories with such mastery that Acid Test reads like a first-rate novel. The book is that much more intriguing and consequential though because the stories are true and the subject matter—the healing of post-traumatic stress—of great currency and importance. We need to know how to treat the trauma that afflicts most of the world or we’re in deep trouble.”
—Richard Rockefeller, former chairman of U.S. Advisory Board of Doctors Without Borders

“If you think LSD is a relic of the Sixties, or good for nothing except getting high, you need to read this riveting and important book. It’s the fascinating story of how LSD and MDMA can, with controlled use, bring near-miraculous benefits to people suffering from mental trauma. Tom Shroder is a fine journalist and a terrific writer; in Acid Test, he’s written a book that should start a long-overdue national conversation, and someday may help to end a lot of unnecessary suffering.”
—Dave Barry

“A captivating narrative with irresistible characters. It will leave you wondering whether we have the moral right to oppose this breakthrough therapy.”
—Gene Weingarten, two-time Pulitzer Prize winning author of The Fiddler in the Subway

“Acid Test is a superb book. The people Tom Shroder introduces us to are across-the-board fascinating, the reporting he's done is deep and persuasive, and the writing is dazzling. Best of all, though, is what any open-minded reader will feel after finishing Acid Test: In a world of hurt, here is a new version of hope.”
—David Finkel, Pulitzer Prize-winning author of The Good Soldiers and Thank You for Your Service

“Acid Test represents such a critical contribution to our societal awareness, one that I am honored to wholeheartedly support. Faced with the challenge to alleviate the suffering of today's combat veterans, we must open ourselves to considering new modalities, revisiting therapeutic agents criminalized by fear and ideology, and harnessing the power of healing rituals and ancient wisdom. Tom Shroder offers a timely and compelling story of stories, illustrating the struggles and opportunities for hope and healing. Put politics and preconceptions aside; open your mind; read this book; follow the data; and speak truth to power so that scientific rigor and emerging knowledge can lead the way. We owe our fellow humans no less.”
—Loree Sutton, psychiatrist, retired US Army Brigadier General and founding director of the Defense Centers of Excellence for Psychological Health and Traumatic Brain Injury