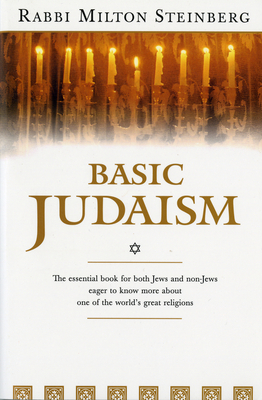 Rabbi Milton Steinberg's Basic Judaism is "one of the best presentations of essential Judaism" (Christian Century).Concise and elegant, this is a book about the faith, ideals, and practices that form the historic Jewish faith. Including both the modernist and the traditionalist view in his exploration, Rabbi Steinberg discusses the Torah, what Judaism says about God and the relationship between man and God, the nature of good and evil in a moral society, and what exists in the Kingdom of God. He also talks about the laws that define Judaism, the practices and rituals that sustain it, and the synagogue and the rabbinate that support it.For all students of Judaism—be they practicing Jews, uncommitted Jews, or curious non-Jews, Rabbi Steinberg offers a brilliant chance to understand what the Jewish faith is, why it has elicited such intense devotion, and why it remains such a mighty force in the lives of its believers and, beyond them, the world.

Rabbi Milton Steinberg graduated from the City College of New York and was awarded a master's degree in philosophy by Columbia University. The recipient of an honorary degree of Doctor of Hebrew Letters from the Jewish Theological Seminary of America, he was Rabbi of the Park Avenue Synagogue in New York until his death.