Murder In The Cathedral (Paperback) 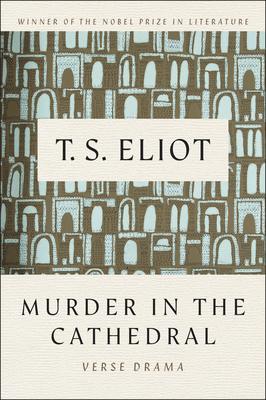 WINNER OF THE NOBEL PRIZE
T. S. Eliot's most famous drama, a retelling of the murder of the archbishop of Canterbury


Written in 1934, Murder in the Cathedral tells of the assassination of Archbishop Thomas Becket in Canterbury Cathedral during the reign of Henry II in 1170. Praised for its poetically masterful handling of issues of faith, politics, and the common good, T. S. Eliot's celebrated play solidified his reputation as the most significant poet of his time.

"The theatre as well as the church is enriched by this poetic play of grave beauty and momentous decision." —The New York Times "This play comes closer to perfection than anything that Eliot has written." —New York Herald Tribune Books "Within its limits the play is a masterpiece...Mr. Eliot has written no better poem than this and none which seems simpler." —The Nation "Mr. T. S. Eliot...has won for religious drama a fresh hearing...Not since 'St. Joan' has there been any play on the English stage in which such tremendous issues as this have been treated with such mastery of thought, as well as dramatic power." —Christian Century "Eliot has found himself anew as a poet, only with an added ease, lucidity and objectiveness." —Spectator —