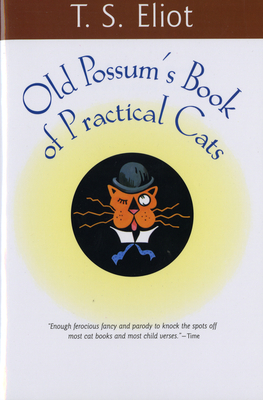 The inspiration for the iconic musical Cats, T. S. Eliot's classic and delightful collection of poetry about cats.


These lovable cat poems were written by T. S. Eliot for his godchildren and continue to delight children and adults alike. This collection is a curious and artful homage to felines young and old, merry and fierce, small and unmistakably round. This is the ultimate gift for cat and poetry lovers.

Edward Gorey (1925-2000) wrote and illustrated such popular books as The Doubtful Guest, The Gashlycrumb Tinies, and The Headless Bust. He was also a very successful set and costume designer, earning a Tony Award for his Broadway production of Edward Gorey's Dracula. Animated sequences of his work have introduced the PBS series Mystery! since 1980.

“Enough ferocious fancy and parody to knock the spots off most cat books and most...verses.” — Time   “An absolutely marvelous rendition of Eliot’s poetic classic, written for his godchildren and friends in the 1930s, which inspired the  Broadway musical Cats.” — Library Journal, starred review —