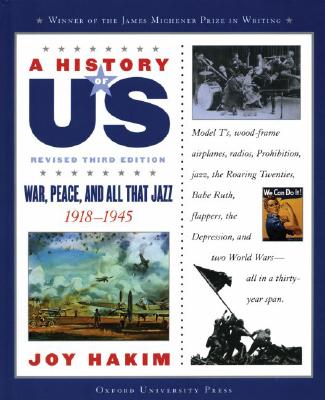 This is book number 9 in the History of Us series.

Recommended by the Common Core State Standards for English Language Arts and Literacy as an exemplary informational text. From woman's suffrage to Babe Ruth's home runs, from Louis Armstrong's jazz to Franklin Delano Roosevelt's four presidential terms, from the finale of one world war to the dramatic close of the second, War, Peace, and All That Jazz presents the story of some of the most exciting years in U.S. history. With the end of World War I, many Americans decided to live it up, going to movies, driving cars, and cheering baseball games a plenty. But alongside this post WWI spree was high unemployment, hard times for farmers, ever present racism, and, finally, the Depression, the worst economic disaster in U.S. history, flip flopping the nation from prosperity to scarcity. Along came one of our country's greatest leaders, F.D.R., who promised a New Deal, gave Americans hope, and then saw them through the horrors and victories of World War II. These three decades full of optimism and despair, progress and Depression, and, of course, War, Peace, and All That Jazz forever changed the United States.

About the Series:
Master storyteller Joy Hakim has excited millions of young minds with the great drama of American history in her award-winning series A History of US. Recommended by the Common Core State Standards for English Language Arts and Literacy as an exemplary informational text, A History of US weaves together exciting stories that bring American history to life. Hailed by reviewers, historians, educators, and parents for its exciting, thought-provoking narrative, the books have been recognized as a break-through tool in teaching history and critical reading skills to young people. In ten books that span from Prehistory to the 21st century, young people will never think of American history as boring again.

Joy Hakim, a former teacher, editor, and writer won the prestigious James Michener Prize for her series, A History of US, which has sold over 4 million copies nationwide. A graduate of Smith College and Goucher College she spent years teaching students from elementary school up to the college level. She also served as an Associate Editor at Norfolk's Virginian-Pilot, and was an Assistant Editor at McGraw-Hill's World News.