Spain: What Everyone Needs to Know(r) (Paperback) 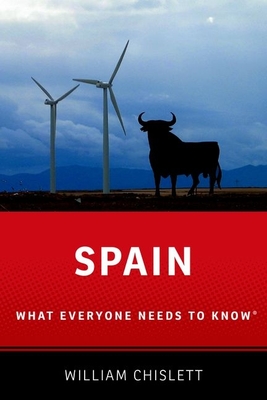 What happens in Spain, among the euro zone's largest economies, matters. Its high unemployment (over 26%), burgeoning public debt, and banking crisis will be formative for the zone's future. In Spain: What Everyone Needs to Know(R), a timely addition to Oxford's acclaimed What Everyone Needs to Know(R)
series, veteran journalist William Chislett provides much-needed political and historical context for Spain's current economic and political predicament. Chislett recounts the country's fascinating and often turbulent history, beginning with the Muslim conquest in 711 and ending with the nation's deep economic crisis, sparked by the spectacular collapse of its real estate and construction sectors in 2010. He explains the country's transition from dictatorship to democracy and covers such issues as the creation of a welfare state, the influx of immigrants, internal strife from the separatist Catalan region, the effects of stringent austerity measures, the strengths and weaknesses of the economy, and how the country can create a more sustainable economic model for the future. In a concise, question-and-answer format that allows readers to quickly access areas of particular interest, the book addresses a wide range of questions, including: What was the legacy of the Muslim presence between 711 and 1492? How did the Spanish Empire Arise? What were the causes of the 1936-39 Civil War? Why did the Socialists win a landslide victory in the 1982 election? What was the impact of European Economic Community membership? What is the violent Basque separatist group ETA? What caused the banking crisis? and more. This engaging overview covers a wide sweep of Spanish history and helps readers understand Spain's place in the world today. What Everyone Needs to Know(R) is a registered trademark of Oxford University Press.

William Chislett is a journalist who has lived in Madrid since 1986. He covered Spain's transition to democracy (1975-78) for The Times of London and was later the Mexico correspondent for the Financial Times (1978-84). He writes about Spain for the Elcano Royal Institute, which has published three books of his on the country, and he has a weekly column in the online newspaper El Imparcial.