Why Leaders Lie: The Truth about Lying in International Politics (Paperback) 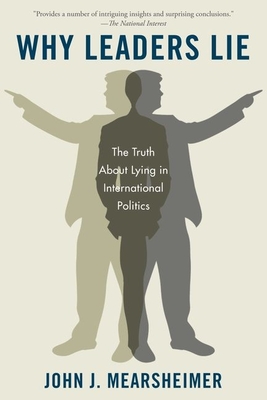 For more than two decades, John J. Mearsheimer has been regarded as one of the foremost realist thinkers on foreign policy. Clear and incisive, a fearlessly honest analyst, his coauthored 2007 New York Times bestseller, The Israel Lobby and U.S. Foreign Policy, aroused a firestorm with its unflinching look at the making of America's Middle East policy. Now he takes a look at another controversial but understudied aspect of international relations: lying. In Why Leaders Lie, Mearsheimer provides the first systematic analysis of lying as a tool of statecraft, identifying the varieties, the reasons, and the potential costs and benefits. Drawing on a trove of examples, he argues that leaders often lie for good strategic reasons, so a blanket condemnation is unrealistic and unwise. Yet there are other kinds of deception besides lying, including concealment and spinning. Perhaps no distinction is more important than that between lying to another state and lying to one's own people. Mearsheimer was amazed to discover how unusual interstate lying has been; given the atmosphere of distrust among the great powers, he found that outright deceit is difficult to pull off and thus rarely worth the effort. Plus it sometimes backfires when it does occur. Khrushchev lied about the size of the Soviet missile force, sparking an American build-up. Eisenhower got caught lying about U-2 spy flights in 1960, which scuttled an upcoming summit with Krushchev.
Leaders more often mislead their own publics, sometimes with damaging consequences. Though the reasons may be noble--Franklin Roosevelt, for example, lied to the American people about German U-boats attacking the destroyer Greer in 1940, to build a case for war against Hitler-they can easily lead to disaster, as with the Bush administration's falsehoods about Iraq's weapons of mass destruction. There has never been a sharp analysis of international lying. Now a leading expert fills the gap with a richly informed and powerfully argued book.

John J. Mearsheimer is the R. Wendell Harrison Distinguished Service Professor of Political Science and the co-director of the Program on International Security Policy at the University of Chicago. His books include The Tragedy of Great Power Politics, which won the Joseph Lepgold Book Prize, and New York Times bestseller The Israel Lobby and U.S. Foreign Policy, which has been translated into twenty-one languages.