Insurance Era: Risk, Governance, and the Privatization of Security in Postwar America (Hardcover) 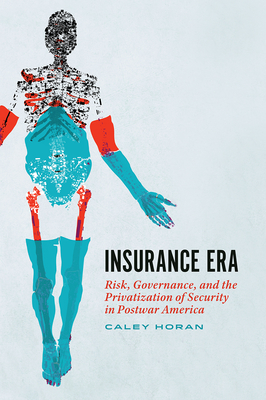 Actuarial thinking is everywhere in contemporary America, an often unnoticed byproduct of the postwar insurance industry’s political and economic influence. Calculations of risk permeate our institutions, influencing how we understand and manage crime, education, medicine, finance, and other social issues. Caley Horan’s remarkable book charts the social and economic power of private insurers since 1945, arguing that these institutions’ actuarial practices played a crucial and unexplored role in insinuating the social, political, and economic frameworks of neoliberalism into everyday life.

Analyzing insurance marketing, consumption, investment, and regulation, Horan asserts that postwar America’s obsession with safety and security fueled the exponential expansion of the insurance industry and the growing importance of risk management in other fields. Horan shows that the rise and dissemination of neoliberal values did not happen on its own: they were the result of a project to unsocialize risk, shrinking the state’s commitment to providing support, and heaping burdens upon the people often least capable of bearing them. Insurance Era is a sharply researched and fiercely written account of how and why private insurance and its actuarial market logic came to be so deeply lodged in American visions of social welfare.

Caley Horan is associate professor of history at the Massachusetts Institute of Technology.

“Insurance Era brilliantly captures the power that insurance came to hold over Americans’ relationship to risk, security, themselves, and one another in the twentieth century. No other book better explains how and why the private triumphed over the public, and the individual over the collective, in recent American life. With great historical imagination, Horan has utterly recast the history of the postwar United States as the origins of our own time.”
— Jonathan Ira Levy, University of Chicago

“History at its best raises fundamental questions: What is fair? Who is responsible for whom? And who gets to decide? Insurance Era is such a history, exposing the central role the private insurance industry played in answering those questions for twentieth-century Americans. As Horan shows, the industry used its huge capital resources to underwrite suburban development and drain cities of their tax bases; it shaped who had access to insurance, who was excluded from such security, and the consequences of that exclusion.  Most importantly, the industry conditioned Americans to think of risk pools as objective and apolitical, a matter of personal responsibility. We continue to live in this insurance era, but in uncovering its history, Horan opens a pathway to a more egalitarian vision of human community.”
— Barbara Young Welke, University of Minnesota

“The insurance industry promised to provide Americans with much-needed security, but as Horan shows in this brilliant new book, its efforts only heightened the risk of individuals and deepened patterns of discrimination for marginalized groups, paving the way for the insecurities of the neoliberal age.”
— Kevin M. Kruse, Princeton University

"Recommended. . . Horan covers the insurance industry's evolution since the 1930s, a time when the public sector appeared poised to dominate the provision of insurance and an underexplored era in US risk management. . . . The book will therefore interest social, cultural, and business historians."
— Choice