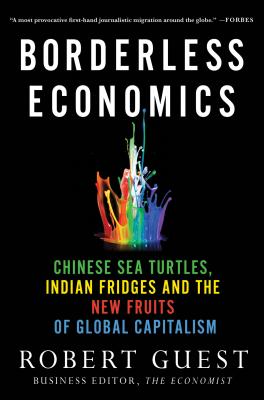 A century ago, migrants often crossed an ocean and never saw their homelands again. Today, they call—or Skype—home the moment their flight has landed, and that's just the beginning. Thanks to cheap travel and easy communication, immigrants everywhere stay in intimate contact with their native countries, creating powerful cross-border networks. In Borderless Economics, Robert Guest, The Economist's global business editor, travels through dozens of countries and 44 American states, observing how these networks create wealth, spread ideas, and foster innovation. Covering phenomena such as how young Chinese studying in the West are infecting China with democratic ideals, to why the so-called "brain drain"—the flow of educated migrants from poor countries to rich ones—actually reduces global poverty, this is a fascinating look at how migration makes the world wealthier and happier.

Robert Guest is currently the Business Editor at The Economist. Before joining The Economist, he was the Tokyo correspondent for The Daily Telegraph. The winner of numerous awards, Guest is a regular on both the BBC and CNN. He is the author of The Shackled Continent.

“If you read only one book on this subject, I recommend Borderless Economics .” —Robert Hahn, Financial Times

“This is a splendid book...In Borderless Economics, journalist Robert Guest has written -- with data, anecdotes, and humour -- an optimistic account of the state of [migration], adapted to the political, economic and technological possibilities of today.” —Nature

“An informative, engaging survey of the beneficial consequences of globalization.” —Kirkus Reviews

“Robert Guest has discovered the quantum mechanics of economic growth and political liberty. It turns out the wave-particle duality of economic matter and political energy is us. We the people of the world-- moving where we want and doing what we will -- create the universe of progress. Governments of Earth, say goodbye to the Newtonian concepts of nation and state. The apple of Borderless Economics has hit you on the head and knocked you out.” —P. J. O'Rourke

“For most, globalization has been about the movement of goods, services, technology and capital. As Robert Guest succinctly explains in this eminently readable book, globalization is actually about people - their migration, the networks they form and the ideas that they transmit through their mobility. In a world grappling with rising protectionist fever, this book is a warning that those nations who want to batten down the hatches and shut the free flow of people and ideas do so at their own risk.” —Nandan Nilekani, Chairman, Unique Identification Authority of India

“Too much of economic and political analysis is about countries. Robert Guest shows us the myriad ways in which countries are connected by people who move around to learn, to work and to live. These networks are increasingly central both to the nature of opportunity and to public policy issues in the United States. The book is persuasive: America will stay prosperous and strong only so long as we remain the Hub of the World.” —Simon Johnson, co-author, 13 Bankers, and professor at MIT Sloan

“Guest has produced a book that is witty, rigorous, humane, provocative and dazzlingly well-reported. Everyone should read it. Bravo!” —Tim Harford, author of Adapt and The Undercover Economist

“Fantastically entertaining and well-written…[I] couldn't put it down.” —Chris Anderson, Editor-in-Chief of Wired and author of The Long Tail and Free.

“This is a thoughtful, entertaining and above all inspiring hymn of praise to the cultural, social and economic benefits of freer migration. Its conclusion should be noted by every politician running for office: immigration is an opportunity, not a threat.” —Bill Emmott, author of 20:21 Vision and Rivals

“A wonderful antidote to the tired and vague clichés about ‘globalization'. Drawing on a breadth of research and decades of reporting from 70 countries, Robert Guest makes the case for why global migration is (mostly) an extraordinary force for good.” —Charles Wheelan, author of Naked Economics: Undressing the Dismal Science