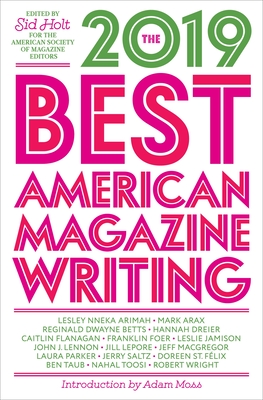 The Best American Magazine Writing 2019 presents articles honored by this year's National Magazine Awards, showcasing outstanding writing that addresses urgent topics such as justice, gender, power, and violence, both at home and abroad. The anthology features remarkable reporting, including the story of a teenager who tried to get out of MS-13, only to face deportation (ProPublica); an account of the genocide against the Rohingya in Myanmar (Politico); and a sweeping California Sunday Magazine profile of an agribusiness empire. Other journalists explore the indications of environmental catastrophe, from invasive lionfish (Smithsonian) to the omnipresence of plastic (National Geographic). Personal pieces consider the toll of mass incarceration, including Reginald Dwayne Betts's "Getting Out" (New York Times Magazine); "This Place Is Crazy," by John J. Lennon (Esquire); and Robert Wright's "Getting Out of Prison Meant Leaving Dear Friends Behind" (Marshall Project with Vice). From the pages of the Atlantic and the New Yorker, writers and critics discuss prominent political figures: Franklin Foer's "American Hustler" explores Paul Manafort's career of corruption; Jill Lepore recounts the emergence of Ruth Bader Ginsburg; and Caitlin Flanagan and Doreen St. F lix reflect on the Kavanaugh hearings and #MeToo. Leslie Jamison crafts a portrait of the Museum of Broken Relationships (Virginia Quarterly Review), and Kasey Cordell and Lindsey B. Koehler ponder "The Art of Dying Well" (5280). A pair of never-before-published conversations illuminates the state of the American magazine: New Yorker writer Ben Taub speaks to Eric Sullivan of Esquire about pursuing a career as a reporter, alongside Taub's piece investigating how the Iraqi state is fueling a resurgence of ISIS. And Karolina Waclawiak of BuzzFeed News interviews McSweeney's editor Claire Boyle about challenges and opportunities for fiction at small magazines. That conversation is inspired by McSweeney's winning the ASME Award for Fiction, which is celebrated here with a story by Lesley Nneka Arimah, a magical-realist tale charged with feminist allegory.

Sid Holt is chief executive of the American Society of Magazine Editors and a former editor at Rolling Stone and Adweek magazines. Adam Moss was the editor in chief of New York magazine from 2004 to 2019. He was elected by ASME to the Magazine Editors' Hall of Fame in 2019.