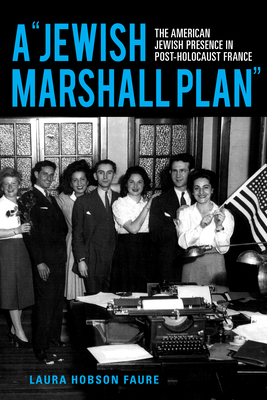 While the role the United States played in France's liberation from Nazi Germany is widely celebrated, it is less well known that American Jewish individuals and organizations mobilized to reconstruct Jewish life in France after the Holocaust. In A "Jewish Marshall Plan, " Laura Hobson Faure explores how American Jews committed themselves and hundreds of millions of dollars to bring much needed aid to their French coreligionists.

Hobson Faure sheds light on American Jewish chaplains, members of the Armed Forces, and those involved with Jewish philanthropic organizations who sought out Jewish survivors and became deeply entangled with the communities they helped to rebuild. While well intentioned, their actions did not always meet the needs and desires of the French Jews.

A "Jewish Marshall Plan" examines the complex interactions, exchanges, and solidarities created between American and French Jews following the Holocaust. Challenging the assumption that French Jews were passive recipients of aid, this work reveals their work as active partners who negotiated their own role in the reconstruction process.