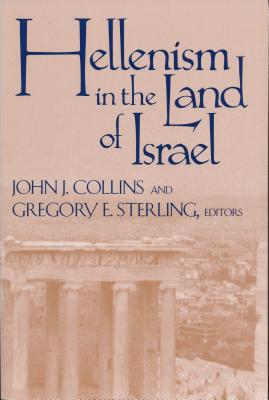 Israeli Jews' response to and appropriation of Greek culture is the subject of the essays in this rich volume. Contributors provide evidence of Greek cultural influence in Judea and Galilee, from before the Maccabean revolt into the rabbinic period. They also probe the limits of that influence, the persistence of Semitic languages and thought patterns, and the exclusiveness of Jewish religion. While Greek thought had a significant impact on Judaism, Jews remained distinct in the Greco-Roman world. Hellenistic Judaism's relationship to Greek culture was never simply one of assimilation or repudiation. Similarly, the Hebrew and Aramaic-speaking Judaism of the homeland remained distinct from the Hellenistic Judaism of the Diaspora.

John J. Collins is Holmes Professor of the Hebrew Bible at Yale University. He is the author of Jewish Wisdom in Helleniatic and The Apocalyptic Imagination: An Introduction to the Jewish Matrix of Early Christianity.Gregory E. Sterling is Professor of the New Testament and Christian Origins and Director of Graduate Studies in Theology at the University of Notre Dame.