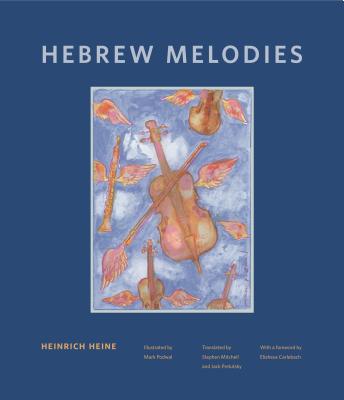 By Heinrich Heine, Stephen Mitchell (Translator), Jack Prelutsky (Translator)
$23.00
This item is backordered and not currently available. Please contact us for an estimated availability date.

One of the most important German poets of the nineteenth century, Heinrich Heine was a convert without conviction. He chose Christianity over Judaism as a means of securing an academic career, but when his conversion failed to yield the hoped-for job opportunities, he devoted himself to writing instead. This volume presents a new translation of Hebrew Melodies, the third cycle of poems in Heine's late masterwork, Romanzero, which many critics have interpreted as Heine's return to his Jewish roots.

As Elisheva Carlebach explains in her foreword, Heine's "return to God" in his final years was motivated not by faith but by a deep admiration of the Jewish people--a sentiment that is clearly reflected in the poems that make up Hebrew Melodies. This edition presents the original German alongside new English translations by Stephen Mitchell, widely known for his ability to make old classics thrillingly new, and Jack Prelutsky, the author of more than fifty poetry collections for children and adults. Mark Podwal's illustrations beautifully portray the joyous, playful elements of Jewish tradition and hint at what Carlebach calls the "menacing edges of history's nightmares," echoing Heine's position as a poet "caught between worlds."

Stephen Mitchell is a scholar and award-winning translator of such works as the Tao Te Ching, the Iliad, the Bhagavad Gita, and Gilgamesh. Jack Prelutsky was named the first U.S. Children's Poet Laureate in 2006. Mark Podwal has illustrated numerous books in collaboration with such luminaries as Elie Wiesel and Harold Bloom. His art is represented in the collections of The Metropolitan Museum of Art and the Victoria and Albert Museum, among many other venues. You can view his work at markpodwal.com.