The Heart of the Declaration: The Founders' Case for an Activist Government (The Lewis Walpole Series in Eighteenth-Century Culture and History) (Paperback) 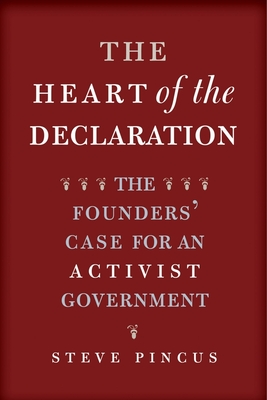 An eye-opening, meticulously researched new perspective on the influences that shaped the Founders as well as the nation's founding document

From one election cycle to the next, a defining question continues to divide the country’s political parties: Should the government play a major or a minor role in the lives of American citizens? The Declaration of Independence has long been invoked as a philosophical treatise in favor of limited government. Yet the bulk of the document is a discussion of policy, in which the Founders outlined the failures of the British imperial government. Above all, they declared, the British state since 1760 had done too little to promote the prosperity of its American subjects. Looking beyond the Declaration’s frequently cited opening paragraphs, Steve Pincus reveals how the document is actually a blueprint for a government with extensive powers to promote and protect the people’s welfare. By examining the Declaration in the context of British imperial debates, Pincus offers a nuanced portrait of the Founders’ intentions with profound political implications for today.

Steve Pincus is the Bradford Durfee Professor of History at Yale University. He is the author of several books on seventeenth- and eighteenth-century British history.

“Pincus convincingly and thoroughly outlines the core principles of the Patriots and of their political opponents, providing a firmly grounded approach to Atlanticizing the political history of the eighteenth century.”—Ken Owen, Junto

"[A] tempting invitation to rethink both the origins of the Revolution and its consequences"—Jack Rakove, Journal of American History

"Informative. . . . Pincus presents a strong case for why, then and now, the government should actively promote the 'pursuit of happiness.'"—Publishers Weekly

"This book resets our baseline for the American Revolution. Far from a localized protest against big government, that rebellion grew from a widely shared vision of public responsibility to stimulate economic development and consumer demand. This is a provocative history both true to its period and stunningly relevant to our times."—Christine Desan, author of Making Money: Coin, Currency, and the Coming of Capitalism

"Steve Pincus shows that a simple question shadowed not just the modern world, but American independence: is prosperity the fruit of an activist or a nightwatchman state? American patriots thought the former, the British government the latter, the result was the US. Brilliant."—James A. Robinson, author of Why Nations Fail: The Origins of Power, Prosperity, and Poverty

"Pincus is one of our best historians. His account is audaciously original, decidedly well-written, and delightfully slim. On display here is rare talent indeed."—Don Herzog, University of Michigan Law School

"Sparkling with interpretive originality and brimming with original sources, Heart of the Declaration contributes mightily not only to the history of the Declaration but also to our understanding of imperial politics, the Revolution, and the political economy of the Atlantic world."—Daniel Hulsebosch, author of Constituting Empire: New York and the Transformation of Constitutionalism in the Atlantic World, 1664-1830

"The Heart of the Declaration incisively probes the affinity between liberty and a capable national state. Drafted with a sharply-etched pen, it absorbingly interprets ideas about political economy, territory, slavery, and statecraft to deepen understanding of the American Founding—then and now."— Ira Katznelson, author of Fear Itself: The New Deal and the Origins of Our Time