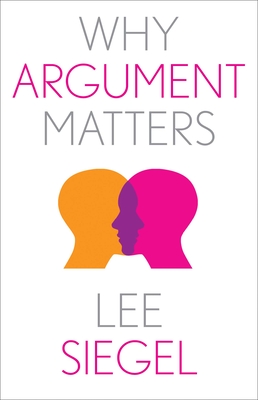 Hailed by the New York Times as a book that “examines the role that argument has played throughout history and how it has shaped human existence.”

“An invigorating reflection on the nature and value of disagreement. . . . Sharp and taut. . . . A lesson in a well-constructed argument itself.”—Publishers Weekly, starred review

“Perhaps more than any other commentary, Why Argument Matters illuminates the root causes of our partisan, venomous, irrational times—and yet somehow rescues from the morass the true nature of argument, its power and beauty.”—Michael Wolff, author of Fire and Fury: Inside the Trump White House

From Eve’s crafty exchange with the serpent, to Martin Luther King’s soaring, subtle ultimatums, to the throes of Twitter—argument’s drainpipe—the human desire to prevail with words has been not just a moral but an existential compulsion. In this dazzling reformulation of argument, renowned critic Lee Siegel portrays the true art of argument as much deeper and far more embracing than mere quarrel, dispute, or debate. It is the supreme expression of humanity’s longing for a better life, born of empathy and of care for the world and those who inhabit it. With wit, passion, and striking insights, Siegel plumbs the emotional and psychological sources of clashing words, weaving through his exploration the untold story of the role argument has played in societies throughout history. Each life, he maintains, is an argument for that particular way of living; every individual style of argument is also a case that is being made for that person’s right to argue. Argument is at the heart of the human experience, and language, at its most liberated and expressive, inexorably bends toward argument.

Lee Siegel, the author of six previous books and the recipient of a National Magazine Award for Reviews and Criticism, publishes widely on culture and politics. He lives in Montclair, NJ, with his wife and two children.

“[A] bold change of perspective. . . . When Siegel writes that ‘to exist is to argue your existence’ . . . he makes an important point.”—Costica Bradatan, Commonweal

“An invigorating reflection on the nature and value of disagreement. . . . Sharp and taut. . . . A lesson in a well-constructed argument itself.”—Publishers Weekly, starred review

“Perhaps more than any other commentary, Why Argument Matters illuminates the root causes of our partisan, venomous, irrational times—and yet somehow rescues from the morass the true nature of argument, its power and beauty.”—Michael Wolff, author of Fire and Fury: Inside the Trump White House

“This is inarguably the book for this moment of nonstop contentiousness. Siegel argues convincingly that argument is not only as American as apple pie, it is an expression of the universal desire for improvement, for which argument is a prerequisite. And he demonstrates that judgments about art, which are supposedly somehow beyond argument, are not.”—George F. Will, Pulitzer Prize–winning columnist

“There is an old saying that the aim of an argument is not victory but progress, which is a mark of humility. Siegel adds that with humility can come playfulness, and a human connection that makes argument not just purposeful but joyful. In these low times, when censorious sanctimony passes for intelligent argument, his book revives an expansive liberal spirit of disagreement without which democracy is doomed.”—Sean Wilentz, Princeton University

“A book like this has never mattered more. Siegel guides us through the historical and philosophical roots of intellectual sparring with great expertise and an infectious vigor. But more than that, he shows us how argument, when done right, can be among the richest forms of human connection. This is a much-needed treatise from one of the most formidable cultural critics of our time.”—Meghan Daum, author of The Problem with Everything: My Journey Through the New Culture Wars

“Why Argument Matters is a robust foray into the nature of argument, from antiquity to the latest culture war clashes. With his impressive range and often thrilling connections, Lee Siegel also makes an argument for himself as one of our most vibrant and least predictable critics.”—Sam Lipsyte, Columbia University