In the Place of Justice: A Story of Punishment and Redemption (Paperback) 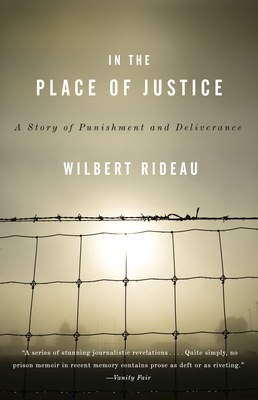 After killing a bank teller in a moment of panic during a botched robbery, Wilbert Rideau was sentenced to death at the age of nineteen. He spent several years on death row at Angola before his sentence was commuted to life, where, as editor of the prison newsmagazine The Angolite, he undertook a mission to expose and reform Louisiana's iniquitous justice system from the inside. Vivid, incisive, and compassionate, this is a detailed account of prison life and a man who accepted responsibility for his actions and worked to redeem himself. It is a story about not giving up; finding love in unexpected places; the power of kindness; and the ability to do good, no matter where you are.

Wilbert Rideau was editor of The Angolite, a prison newsmagazine that during his tenure was nominated seven times for a National Magazine Award. While in prison, he was a correspondent for NPR’s Fresh Air; coproduced and narrated a radio documentary, “Tossing Away the Keys,” for NPR’s All Things Considered; served as correspondent for "In for Life" for ABC-TV's Day One”; and codirected the Academy Award–nominated film The Farm: Angola, USA. He is the recipient of a George Polk Award and an American Bar Association Silver Gavel Award, among others. He was awarded a Soros Justice Fellowship in 2007 and works as a consultant with the Federal Death Penalty Resource Counsel Project. He lives in Louisiana.

“Incisive . . . As emotional, as any words I’ve read in a long time.”—Dwight Garner, The New York Times

“Riveting . . . Amazing . . . The picture of prison life painted by Rideau isn’t the one portrayed in many movies. . . . Now he has provided a wonderful chance to share his remarkable life.”—Associated Press

"A masterpiece in the realm of autobiographies." –Anniston Star

“Fascinating and inspiring . . . This book is a gift to all of us in so many ways.”—BookPage

“Rideau comes across as truthful, remorseful, and straightforward . . . In the Place of Justice is remarkably even-handed and generous.”—Palm Beach Arts Paper

“Searing, suspenseful, stomach-churning and soul-stirring. . . . A sobering indictment of the criminal justice and penal systems in Louisiana over the past half century—and testimony to the triumph of the human spirit.”—Tulsa World

“A series of stunning journalistic revelations . . . Quite simply, no prison memoir in recent memory contains prose as deft or as riveting.”—Vanity Fair

“A richly detailed [and] all too rare look at life behind bars.”—The New York Review of Books

"Perhaps no book written by an inmate has ever conveyed so much factual and emotional information about day-to-day prison life."--San Francisco Chronicle

“Candid . . . Rideau is the rarest of American commodities—a man who exited a penitentiary in better shape than when he arrived.”—The New York Times Book Review