Guilty: Liberal "Victims" and Their Assault on America (Paperback) 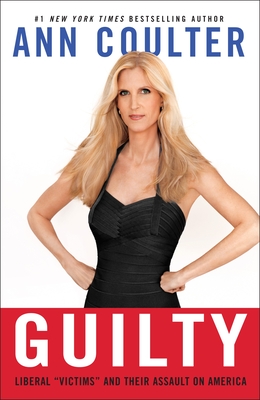 Who are the victims here?

To hear liberals tell it, you’d think they do nothing but suffer at the hands of ruthless entities like the “Republican Attack Machine” and Fox News.

It’s just another instance of the Big Lie, of course. In Guilty, Ann Coulter explodes this myth to reveal that when it comes to bullying, no one outdoes the Left. For instance:

• The myth of the Republican Attack Machine: The most amazing thing liberals have done is create the myth of a compliant right-wing media with Republicans badgering baffled reporters into attacking Democrats. It’s so mad, it’s brilliant.

• “Brave” liberals: In addition to being beautiful, compassionate tribunes of the downtrodden, liberals are brave. I know that because they’re always telling me how brave they are.

• Obambi’s luck: While B. Hussein Obama piously condemned attacks on candidates’ families, his media and campaign surrogates ripped open the court-sealed divorce records of his two principal opponents in his Senate race in Illinois.

One recurring truth about liberals, says Coulter, is that “they viciously attack all while wailing that they are the true victims.” With Guilty–a shockingly specific catalog of offenses that liberals would rather we forget–Ann Coulter presents exhibits A through Z.

ANN COULTER is the #1 New York Times bestselling author of If Democrats Had Any Brains, They’d Be Republicans; Godless; How to Talk to a Liberal (If You Must); Treason; Slander; and High Crimes and Misdemeanors.