The Charming Quirks of Others (Isabel Dalhousie Series #7) (Paperback) 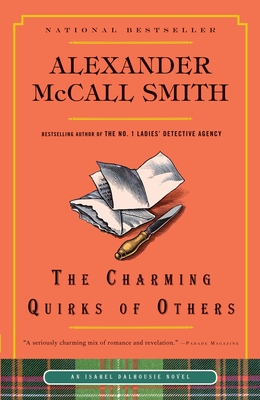 This is book number 7 in the Isabel Dalhousie Series series.

Nothing captures the charm of Edinburgh like the bestselling Isabel Dalhousie series of novels featuring the insatiably curious philosopher and woman detective.  Whether investigating a case or a problem of philosophy, the indefatigable Isabel Dalhousie, one of fiction’s most richly developed amateur detectives, is always ready to pursue the answers to all of life’s questions, large and small.

Isabel has been asked to discreetly investigate the candidates for the position of headmaster at a local boys’ school. The board has three final candidates but has received an anonymous letter alleging that one of them is not suitable.What she discovers about the candidates is surprising, but what she discovers about herself and about Jamie, the father of her young son, turns out to be equally revealing. Isabel’s investigation will have her exploring issues of ambition, as well as of charity, forgiveness, and humility, as she moves nearer and nearer to some of the most hidden precincts of the human heart.

ALEXANDER McCALL SMITH is the author of the No. 1 Ladies' Detective Agency series, the Isabel Dalhousie series, the Portuguese Irregular Verbs series, the 44 Scotland Street series, and the Corduroy Mansions series. He is professor emeritus of medical law at the University of Edinburgh in Scotland and has served with many national and international organizations concerned with bioethics. He was born in what is now known as Zimbabwe and was a law professor at the University of Botswana. He lives in Scotland. Visit his website at www.alexandermccallsmith.com.

"A seriously charming mix of romance and revelation." --Parade Magazine

“Like Mma Ramotswe of the No. 1 Ladies Detective Agency, Isabel has the gift of an expansive, forgiving humanity which embraces the world it inhabits.” —The Scotsman

“McCall Smith’s heroes are among the most endearing in contemporary fiction . . . because they're so humble in their quest for goodness.” —Richmond Times-Dispatch

“Isabel is a force to be reckoned with.” —USA Today

“Charmingly told. . . . Its graceful prose shines, and Isabel’s interior monologues—meditations on a variety of moral questions—are bemused, intelligent and entertaining.” —The Seattle Times

“In Mma Ramotswe, [McCall Smith] minted one of the most memorable heroines in any modern fiction. Now, with the creation of Isabel Dalhousie, he’s done it again. . . . She’s such good company, it’s hard to believe she’s fictional. You finish [one] installment greedily looking forward to more.” —Newsweek