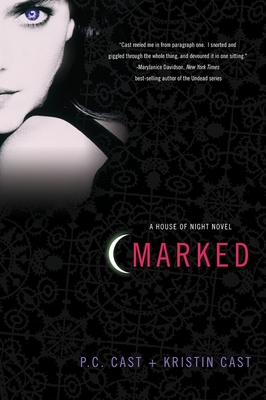 This is book number 1 in the House of Night Novels series.

Enter the dark, magical world of the House of Night series by bestselling authors P.C. Cast and Kristin Cast, a world very much like our own, except here vampyres have always existed.

One minute, sixteen-year-old Zoey Redbird is a normal teenager dealing with everyday high school stress: her cute boyfriend Heath, the school's star quarterback who suddenly seems more interested in partying than playing ball; her nosy frenemy Kayla, who's way too concerned with how things are going with Heath; her uber-tough geometry test tomorrow.

The next, she's Marked as a fledgling vampyre, forcing her to leave her ordinary life behind and join the House of Night, a boarding school where she will train to become an adult vampyre. That is, if she makes it through the Change—and not all of those who are Marked do.

It sucks to begin a new life, especially away from her friends, and on top of that, Zoey is no average fledgling. She has been chosen as special by the vampyre Goddess, Nyx. Zoey discovers she has amazing powers, but along with her powers come bloodlust and an unfortunate ability to Imprint with Heath, who just doesn't know how to take "no" for an answer. To add to her stress, she is not the only fledgling at the House of Night with special powers: when she discovers that the leader of the Dark Daughters, the school's most elite group, is misusing her Goddess-given gifts, Zoey must look deep within herself for the courage to embrace her destiny—with a little help from her new vampyre friends.

P.C. Cast is the author of the House of Night novels, including Marked, Betrayed, Chosen, and Untamed.

Ms. Cast is a #1 New York Times and USA Today Best-Selling author and a member of the Oklahoma Writers Hall of Fame. With more than 20 million copies in print in over 40 countries, her novels have been awarded the prestigious Oklahoma Book Award, YALSA Quick Pick for Reluctant Readers, Romantic Times Reviewers’ Choice Award, the Prism, Holt Medallion, Daphne du Maurier, Booksellers’ Best, and the Laurel Wreath.

Ms. Cast was born in the Midwest and grew up being shuttled back and forth between Illinois and Oklahoma, which is where she fell in love with Quarter Horses and mythology. After high school she joined the United States Air Force and began public speaking and writing. After her tour in the USAF, she taught high school for 15 years before retiring to write full time. She now lives in Oregon surrounded by beloved cats, dogs, horses, and family.

Kristin Cast is a #1 New York Times and #1 USA Today bestselling author who teams with her mother to write the wildly successful HOUSE OF NIGHT series. She has editorial credits, a thriving t-shirt line, and a passion for all things paranormal. When away from her writing desk, Kristin loves going on adventures with her friends, family, and significant other, playing with her dogs (Grace Kelly and Hobbs the Tiny Dragon), and is obsessed with her baby.

“From the moment I stuck my face in this book it hooked me! Totally awesome new take on vampires! Marked is hot and dark and funny. It rocks!” —Gena Showalter, author of MTV’s Oh My Goth

“Cast reeled me in from paragraph one. I snorted and giggled through the whole thing, and devoured it in one sitting.” —MaryJanice Davidson, New York Times best-selling author of the Undead series